Insurance Australia Group has suffered a first strike against executive pay, after investors punished the company for paying bonuses and awarding pay rises to senior staff during the same year it reported a significant loss and grappled with governance failures.

IAG recorded a full-year loss of $427 million in August, after it was forced to put aside $1.15 billion for business interruption claims due to poorly worded policies that meant IAG was liable for losses sustained by small businesses during COVID-19 lockdowns. 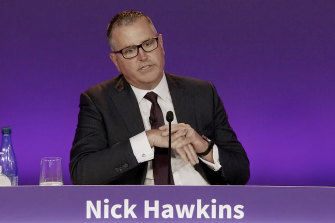 IAG CEO Nick Hawkins pledged to continue investing in lifting governance and accountability across the insurer.

Chief executive Nick Hawkins said during the annual general meeting on Friday the loss was caused by “failure of our controls and management systems” but pledged to continue investing in lifting governance and accountability across the company. Over the year, the insurer also dealt with staff underpayments and a class action settlement over junk insurance products.

Outgoing chair Elizabeth Bryan repeatedly apologised to shareholders, after she used her opening address to explain executive bonuses were necessary to boost morale after what had been a challenging two years involving bushfires and COVID-19.

Ms Bryan said staff responsible for governance failures, including the Swann Insurance class action, had been severely penalised and held accountable. “To give you an example of the power of these measures, one individual’s forfeiture was equal to more than twice their annual base salary,” she said. “Importantly, no member of the senior leadership team with direct accountability for the operational risk matters is still employed at IAG.”

However, these assurances did not filter through and 57 per cent of shareholders voted against IAG’s remuneration report. This included giving Mr Hawkins a $265,000 base-pay rise to $1.4 million and a short-term bonus of $634,000 and chief risk officer David Watts was paid a short-term cash bonus of $224,000, on top of his base pay of $875,000.

During questioning, retail shareholder Darren Walker said there was a problem with the insurer’s leadership and rejected the apologies. “Why is it not time to consider all of your positions?” he said.

A “first strike” occurs when a company’s remuneration report receives a “no” vote of 25 per cent or more by shareholders at the company’s annual general meeting. Two consecutive strikes can trigger a motion to spill the board.

A number of major proxy firms recommended a vote against the remuneration report. Institutional Shareholder Services (ISS) claimed IAG’s bonuses need to be more closely aligned to financial results and the CEO’s pay rise of 12.5 per cent was “well above general salary inflation” and “inconsistent with the company performance and shareholder outcomes”.

ISS head of research Vas Kolesnikoff said he was not surprised by the shareholder reaction because there was a fundamental mismatch between the company’s financial performance and the rewards given to executives.

“It’s one of those things. Some directors, some executives may take this personally,” he said. “I just don’t think it’s a personal thing. It’s an objective, did shareholders get the results? Is there requisite alignment of bonuses with the results? Now they have to correct it.”

Tribeca Investment Partners portfolio manager Jun Bei Liu said IAG would likely review its remuneration policy, adding the shareholder reaction was understandable because it had been “very challenging over the last 18 months” for IAG shareholders.

“This business, even compared to others like Suncorp, has really lagged. It was previously considered a premium player. In that environment, shareholders are asking, is that right? Is that the right thing to do?”

Ms Liu, who owns a small shareholding in IAG, voted in favour of the remuneration report in an effort to encourage management to drive better performance. “It’s always a delicate balance,” she said. ”I do feel there were a few things outside their control.”

Alongside the AGM, IAG provided a trading update where it confirmed guidance for FY22 and forecast modest growth in customer numbers and ongoing rate increases in certain cover. Ms Liu said this was an encouraging sign. “The position is things will get better, we certainly want to see an improvement.”