‘I am the backup plan’: Boeing’s new boss slams predecessor over MAX disaster

In his eight weeks on the job, Boeing's chief executive, David Calhoun, has come to one overriding conclusion: Things inside the aerospace giant were even worse than he thought.

In a wide-ranging interview this week, Calhoun criticised his predecessor in blunt terms and said he was focused on transforming the internal culture of a company mired in crisis following two crashes that killed 346 people.

To get Boeing back on track, Calhoun said he was working to mend relationships with angry airlines, win back the confidence of international regulators and appease an anxious President Donald Trump — all while moving as quickly as possible to get the grounded 737 Max back in the air.

"It's more than I imagined it would be, honestly," Calhoun said, describing the problems he is confronting. "And it speaks to the weaknesses of our leadership." 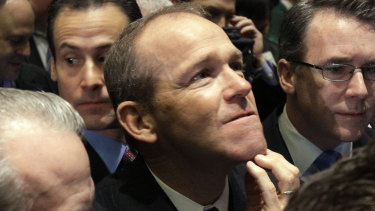 Boeing's previous chief executive, Dennis Muilenburg, was fired in December after presiding over a series of embarrassing setbacks that culminated in the shutdown of the 737 factory this year.

Calhoun formally took over in January, but he has been involved in this mess from the beginning. A protégé of Jack Welch from his time at General Electric, Calhoun has been on Boeing's board since 2009 and was elevated to chairman late last year.

Before becoming the chief executive, he had vigorously defended Muilenburg, saying in a CNBC appearance in November that Muilenburg "has done everything right" and should not resign. One month later, the board ousted Muilenburg and announced Calhoun as his replacement.

"Boards are invested in their CEOs until they're not," said Calhoun, sitting in a dim conference room at the Boeing Leadership Centre, a corporate campus outside St. Louis where Muilenburg's photo is still displayed prominently.

Now that he's in charge, Calhoun has become more willing to openly criticise Muilenburg. He said the former chief executive turbocharged Boeing's production rates before the supply chain was ready, a move that sent Boeing shares to an all-time high but compromised quality.

I'll never be able to judge what motivated Dennis, whether it was a stock price that was going to continue to go up and up, or whether it was just beating the other guy to the next rate increase […] If anybody ran over the rainbow for the pot of gold on stock, it would have been him."

"I'll never be able to judge what motivated Dennis, whether it was a stock price that was going to continue to go up and up, or whether it was just beating the other guy to the next rate increase," he said, adding later, "If anybody ran over the rainbow for the pot of gold on stock, it would have been him."

Calhoun and the rest of Boeing's board never seriously questioned that strategy, in part because before the first Max crash off the coast of Indonesia in October 2018, the company was enjoying its best run in years. What's more, the board believed that Muilenburg, an engineer who had been at Boeing for his entire career, was so deeply informed about the business that he was a good judge of the risks involved in ramping up production.

"If we were complacent in any way, maybe, maybe not, I don't know," Calhoun said. "We supported a CEO who was willing and whose history would suggest that he might be really good at taking a few more risks." 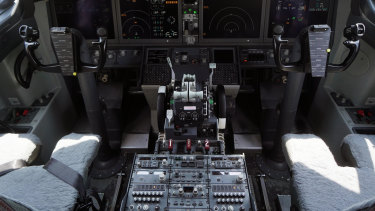 The cockpit of a grounded Boeing 737 MAX jet.Credit:Bloomberg

It was only after the Max was grounded last March after a crash in Ethiopia that Muilenburg's optimistic approach became viewed as a liability. Airlines grew livid after he repeatedly voiced overly optimistic timetables about when the Max would return to service. The head of the Federal Aviation Administration, Stephen Dickson, was so frustrated that he reprimanded Muilenburg in a private meeting and publicly told FAA employees to resist pressure from the company.

"They felt like they were being pushed into a timeline," Calhoun said of the FAA, adding that the "regulator was never there alongside of us, but apparently our team didn't quite come up to grips with that."

We supported a CEO who was willing and whose history would suggest that he might be really good at taking a few more risks.

One of Calhoun's initial tasks as chief executive was to go on an apology tour, holding a series of what he called "greet-and-mend opportunities." The first stop was the White House.

At a private meeting with Trump on Calhoun's third day on the job, the president told him that he liked Muilenburg but believed a leadership change was needed. The president said he hoped Boeing was investing all of its resources into getting the plane back in the air.

Calhoun said he recently asked Boeing employees to "lay out in gory detail what needed to be done" to get the plane certified. "And then when they told me exactly what that was, I added a day or two to it," he said.

His conclusion was that the Max might be approved some time by the end of August, pushing back again the likely return of the plane by six months.

"Restoring credibility with the FAA was not as hard as people think," he said, "They just didn't want to be boxed in anymore. They were sick of it."

While he has been contrite about damaging internal messages released in January, Calhoun stopped short of saying that the company has systemic cultural problems.

He called the messages, in which Boeing employees ridiculed the FAA and denigrated their own colleagues, "totally unacceptable" but said they were not representative of Boeing more broadly. "I see a couple of people who wrote horrible emails," he said.

He also delicately maneuvered between accepting responsibility for the two crashes and pointing the finger elsewhere.

When designing the Max, the company made a "fatal mistake" by assuming pilots would immediately counteract a failure of new software on the plane that played a role in the Lion Air and Ethiopian Airlines accidents. But he implied that the pilots from Indonesia and Ethiopia, "where pilots don't have anywhere near the experience that they have here in the US," were part of the problem, too.

Asked whether he believed American pilots would have been able to handle a malfunction of the software, Calhoun asked to speak off the record. The Times declined to do so.

"Forget it," Calhoun then said. "You can guess the answer."

He dismissed concerns about the board's decision to give him a $US7 million bonus based in part on whether the Max returned to service. "The objective is to get the Max up safely," he said. "Period."

When asked why he didn't elect to forgo his salary altogether, he said, "Cause I'm not sure I would have done it."

Pulling Boeing out of the hole it has dug will take years, Calhoun said. He said he would focus on insulating engineers from business pressures and that he wasn't done shaking up the company's leadership. At a meeting with his senior leadership team on Tuesday, Calhoun introduced a new set of values intended to guide the company, which he hopes will inspire employees still working on getting the 737 Max back in service.

In the meantime, Calhoun is focused on the basics: producing jets at a pace the factory can handle, instilling discipline up and down the company, and hunting for bad news and acting on it.

"If I don't accomplish all that," he said, "then you can throw me out."