Home » World News » How we can fight the coronavirus

How we can fight the coronavirus

While some of his colleagues have downplayed coronavirus fears, Tucker Carlson over the last few weeks has taken a much different approach. And that approach was on full display Monday night when Carlson seemed to call out both President Donald Trump and some of his colleagues on Fox News — without naming them specifically — for dismissing what he told viewers is a “very serious problem.”

“People you trust, people you probably voted for, have spent weeks minimizing what is clearly a very serious problem,” Carlson said. “‘It’s just partisan politics,’ they say. ‘Calm down. In the end this was just like the flu and people die from that every year. Coronavirus will pass.”
Carlson said people who make such arguments may have good intentions, but they’re wrong. “They may not know any better,” Carlson said. “Maybe they’re just not paying attention, or maybe they believe they’re serving some higher cause by shading reality. … And there’s an election coming up. Best not to say anything that might help the other side. We get it. But they’re wrong” Carlson called it a “major event,” stressing, “It’s definitely not just the flu.”
At one point in his monologue, it appeared as if Carlson were speaking directly to Trump. Carlson said the “surest sign of strength” is to “tell the truth” instead of just “assuring people that everything will be fine.” Carlson added that “tax cuts and lower rates” probably won’t revive an economy if factories, restaurants, and other areas of American life are “shut down to contain the virus.”

>> Of note: While Carlson has taken coronavirus seriously, he also asked a guest about the conspiracy theory that the virus was created in a Chinese lab. And it’s impossible to ignore the racial overtones in his coverage…

While Carlson was delivering his monologue, Trish Regan was on Fox’s sister channel dismissing coronavirus as nothing more than an attempt to impeach Trump. “The hate is boiling over,” Regan said in a truly over-the-top segment. “Many in the liberal media using … coronavirus in an attempt to demonize and destroy the President.”
And in the hour after Carlson’s show, Sean Hannity continued recycling his usual talking points, claiming that the media is engaged in an “ongoing effort” to use the coronavirus “as a political weapon” to “bludgeon” Trump. Hannity said people should take precautionary steps, but told viewers that he believed the coverage of the virus “is beyond despicable.” Hannity added later in the show, “I don’t like how we are scaring people unnecessarily.”
None of it is surprising. When all else fails, pro-Trump sycophants like Regan and Hannity blame the messengers. They encourage their viewers to ignore reality. They tell them that the media is just fabricating another crisis to go after Trump. Unfortunately, actual lives are at risk this time…
>> Worth pointing out: This even occurs when it’s a conservative news organization reporting inconvenient truths. Mark Levin lashed out at the Drudge Report on Monday, accusing it of “panicking people…”

Limbaugh pushes his own conspiracy

Over on radio, Rush Limbaugh pushed his own conspiracy theory. He claimed that Democrats want Trump to stop holding rallies “not because of public safety, not because of public health” but to hurt Trump politically. “If you can’t beat Trump and if you want to stop the appearance of excitement about the Trump campaign, then stop the rallies,” Limbaugh said.

CNN calls it a pandemic

Starting on Monday, CNN started using the term “pandemic” to describe the coronavirus outbreak. “It is not a decision we take lightly,” CNN chief medial correspondent Sanjay Gupta explained. “While we know it sounds alarming, it should not cause panic.”
“I take this shift in language very seriously,” Gupta wrote, “and I spent the last several days speaking to public health leaders, epidemiologists and clinicians about the terminology. While some were understandably conservative, everyone agreed that we are now in a pandemic. Now is the time to prepare for what may be ahead.”

Trump said the press will be briefed Tuesday on initiatives his administration will take to combat the economic toll coronavirus is taking on the United States. Trump didn’t go into much detail, but promised on Monday such steps will be “major.” He floated a payroll tax cut and assistance for hourly workers. According to the W.H. schedule, the coronavirus task force will hold a press briefing at 5:30pm ET in the briefing room.
The announcement of economic action came after the Dow had the worst point drop on record. Some news orgs referred to it as another “Black Monday.” Drudge referred to it as a “MARKET BLOODBATH.” And CNBC analysts noted it was a “brutal” and “ugly, ugly day on Wall Street.”
>> What remains to be seen: Will Trump’s economic announcement calm the markets? Or will stocks continue to plunge? 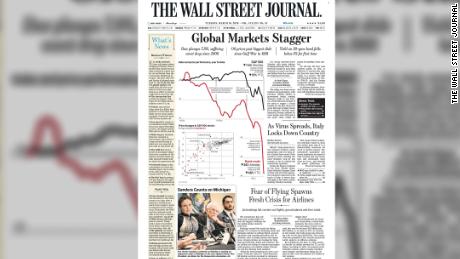 What media outlets are doing

— “Politico, the Washington Post, the Daily Beast, and Mother Jones have asked reporters who covered CPAC to self-quarantine and work remotely due to concerns that they may have been exposed to the novel coronavirus,” Andrew Beaujon reported Monday for Washingtonian…
— “Out of an abundance of caution,” Vice Media said in a statement that it was asking its employees in its S2 Brooklyn office “who can work from home to do so.” Vice said it was taking the measure after one of their employees “may have been exposed” to the virus…
— Via Stelter: “A+E Networks and AMC Networks are both canceling the live presentations they had scheduled in March as part of the industry’s annual ‘upfront’ ad-sales market,” Variety’s Brian Steinberg reported Monday. Last week Fox News cancelled its presentation for advertisers, “citing health concerns.” And “Comcast’s FreeWheel ad-tech unit did the same.” So we might see more of this. But as Steinberg noted, the biggest presentations don’t take place until May, and those plans are “intact” for now…

— NYT regularly runs work from home tests to ensure its staff can work well remotely, a spokesperson told me, but now due to coronavirus, the newspaper is implementing such practices on a larger scale…
— The American Society of Magazine Editors announced it will postpone the annual presentation of the National Magazine Awards scheduled for Thursday evening and move it to the spring. “Given, however, the near-certain spread of coronavirus in New York, ASME has concluded that postponing the awards is the right thing to do,” exec director Sidney Holt said in a statement…
Source: Read Full Article