Democratic members of Congress pushing to limit the presidential pardon power called experts to give historical and legal perspectives on such action, with one historian suggesting that “we must make it more difficult to use or dangle a pardon to cover up a crime by the president or his friends” on Tuesday.

“Although I am not here as a proponent of any particular fix, the history of controversial presidential pardons suggests to me that we must make it more difficult to use or dangle a pardon to cover up a crime by the president or his friends or associates, that we should remove the temptation to reward political allies, especially at the end of a term when public sanctions are at their weakest, and that we must also eliminate the temptation of the self-pardon,” historian and New York University professor Timothy Naftali told lawmakers during a Tuesday hearing.

JONATHAN TURLEY: TRUMP’S FINAL LIST OF PARDONS – THE GOOD, THE BAD AND THE UGLY

Rep. Steve Cohen, D-Tenn., re-introduced in January a constitutional amendment that would limit the president’s ability to pardon himself, his family and his officials. Cohen is chair of the House Judiciary Subcommittee on the Constitution, Civil Rights, and Civil Liberties, which held Tuesday’s hearing on presidential clemency power.

Cohen connected his push for a limit on pardon power to former President Donald Trump, claiming that Trump had “shamelessly and corruptly shielded himself from the consequences of his own and others’ misconduct.” 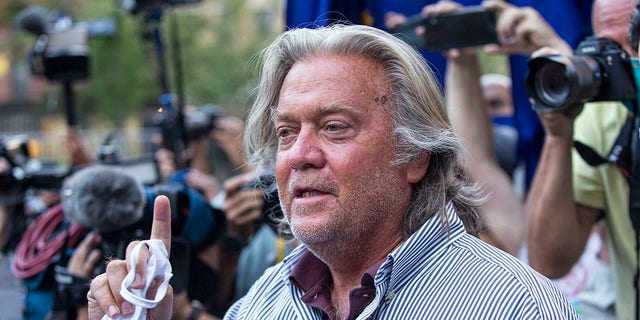 In this Aug. 20, 2020, file photo, President Donald Trump’s former chief strategist, Steve Bannon, speaks with reporters in New York after pleading not guilty to charges that he ripped off donors to an online fundraising scheme to build a southern border wall. (AP Photo/Eduardo Munoz Alvarez, File)

“The question we need, as Americans, to think about is whether the Nixon team were an aberration. Were they the only corrupt people to be in the White House?” Naftali said. “I don’t think so. … There’s enough evidence for corrective action without even talking about [Trump].”

“There’s enough historical data that the system wasn’t working beforehand, and now the outrage of those worried about the Trump era should combine with the continuing era of people worrying about the Clinton era,” continued Naftali, who referenced Clinton’s pardon of financier Marc Rich. “The founders made a few mistakes.”

On the other side of the argument, Josh Blackman, a constitutional law professor at the South Texas College of Law Houston, said he opposed Cohen’s constitutional amendment.

Blackman said that pardons are not necessarily about individuals — presidents can use pardons to “advance broader public policies.” He cited examples like George Washington pardoning participants in the Whiskey Rebellion and Thomas Jefferson pardoning individuals convicted under the Sedition Act.