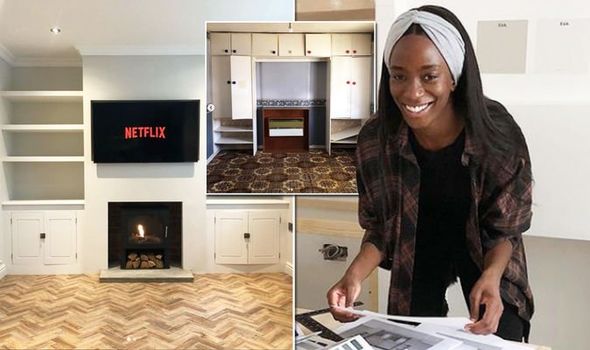 Liv Madeline, the face of house renovation account Renovating Chez Nous, shares an insight into her experience slowly renovating an ex-council flat in Edgware, London. After buying the 50s property, last renovated in the 1980s, she and her partner Rob set about demolishing the home themselves.

After spending £295k on the Zone 4, two-level, two-bedroom home, the couple were left without cash to pay upfront for a full renovation of the extremely dated and even dangerous home.

The couple were quoted between £50k and £60k to renovate the home, which they could not afford.

The pair decided to renovate without getting another loan for the words, committing to doing most of the work themselves.

For Liv, this included creating her dream living room, cosy and perfect for watching movies.

She had the idea to craft alcoves and a faux fireplace around an electric fire in the living room.

Liv, who posts videos detailing the renovation on her Youtube Channel, said: “I’ve always liked the idea of your living room being a cinema setting, but also cosy.

“I’ve always also liked the idea of a fireplace.

“I had visions of having a space where we’ve got the TV mounted on the wall and cosy fireplace as well.”

“We were lucky, having an original 50s home, we had two fireplaces, with an electric one in the living room, which wasn’t really working well.

“Instead of getting rid of it we thought, how can we make it look real?”

Liv worked with a plasterer to create the look she wanted, with a central fireplace shoot and cupboards and shelves built into the space on either side.

Liv said: “I just came up with it myself. When the plasters came in, I basically drew out exactly how I wanted the walls to be done up.

“So he put timbers up, I came in the next day and the timbers looked perfect.

“Then he came in the next day with plasterboards and just plastered it up and that was it.”

One follower called the work the “best before and after I’ve ever seen”.

Another said: “What an incredible difference! Amazing.”

Renovating the original 50s property has been no easy feat for the couple, who are working through the project slowly to save money.

“We put the deposit down in January and we got the keys April 2019,” Liv explained.

“We didn’t realise how much work was going to be involved.”

The couple tore the home back to bricks in the extensive renovation.

“In modern houses wherever you’ve got cables and pipes, everything’s under the floorboards or combined in walls, but with this property, everything was wall-mounted so you could see the pipes on the walls, electric wires on the walls, which weren’t covered up. It’s very dangerous,” Liv explained.

She said: “I can’t even tell you the number of times I cried, but it’s nice now and I’m happy.”

After moving into their new home last year, Charlotte Reynolds and Mitchell Shergold decided to renovate the whole house, posting pictures with updates of the revamp on the couple’s Instagram page.