Multimedia giant Disney has refused to clarify how much it claimed through the JobKeeper wage subsidy program in 2020 amid revelations workers at the company and its ESPN subsidiary received thousands through the scheme while revenues grew.

US-based Disney, which boasts a market value of $US334 billion ($453 billion), operates a number of production companies and local subsidiaries in Australia which primarily collect licensing fees for its extensive film productions, subscription revenue from its Disney+ streaming platform, and merchandising royalties for products and tie-ins, such as its range of licensed “Ooshie” toys released through supermarket giant Woolworths last year. 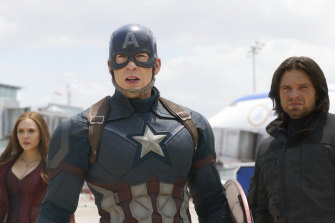 Disney, which owns Marvel franchises such as Captain America and The Avengers, likely received millions in JobKeeper.Credit:Disney

The company’s US parent also owns a majority stake in sports giant ESPN, which claimed $369,000 in JobKeeper payments through its local operations last year, filings with corporate regulator ASIC show. This was off the back of a 1.65 per cent rise in revenue to $55.4 million, though profits fell 13 per cent, largely due to an additional $2 million in royalties paid by the company to related parties.

However, a local spokesperson for Disney’s larger main Australian subsidiary – the Walt Disney Company Australia – refused to clarify how much the broader company took via JobKeeper, despite fresh revelations at least some of its employees had been placed on the scheme.

The Age and The Sydney Morning Herald have seen local employee payslips which show JobKeeper payments commencing in May last year, which was the cutoff for companies to alert the ATO if they would be participating in the scheme.

Unlike ESPN’s filings, Disney Australia’s financial records do not explicitly set out any JobKeeper claimed by the business. However, they do reference “other income”, which covers government grants, which predominantly covers the many grants Disney receives for local film and TV program productions.

Disney’s other income spiked 141 per cent to $65.8 million for the 12 months to the end of September 2020. With 234 employees locally, the company could have claimed as much as $4.5 million in JobKeeper, though the actual amount is likely less than that.

But a spokesperson for Disney said the business would not comment on the quantum of JobKeeper received by the business and did not respond to further questions or calls from The Age and The Sydney Morning Herald on the topic.

The local subsidiary’s revenue rose 20 per cent to $607 million when including its other income, and Disney’s profits grew nearly 50 per cent to $34.2 million, which saw the tax paid by the business more than double. All of its profits were paid as a $35 million dividend to its US parent company.

Scrutiny over the amount of JobKeeper claimed by profitable businesses and those who saw their revenues rise during the pandemic has been mounting recently following calls from Labor and crossbenchers for the government to release a list of all companies that claimed the $88 billion subsidy and saw their fortunes increase.

The push comes amid recent findings by The Age and The Sydney Morning Herald that luxury retailers such as Gucci and Bulgari claimed more than $10 million combined in JobKeeper while also posting multimillion-dollar profits.

So far, Treasurer Josh Frydenberg has resisted these calls, however, some members of the government have expressed support for profitable companies to repay the subsidy, such as Home Affairs Minister Karen Andrews.

“I think there’s actually a responsibility on many of those businesses now. If they are doing well, they need to do a bit of soul-searching,” she told ABC Radio Gold Coast on Monday.