Speaking before MPs prepared to debate legislation in Parliament that would bring the code into law Mr Frydenberg said Google’s deals with media companies this week would sustain public interest journalism in Australia “for years to come.”

“This is a historic moment. A world first. The digital giants [are] entering into negotiations and agreements with Australian news media businesses for original content,” Mr Frydenberg said “None of these deals would be happening if we didn’t have the legislation before the Parliament. This world-leading mandatory code is bringing the parties to the table.” 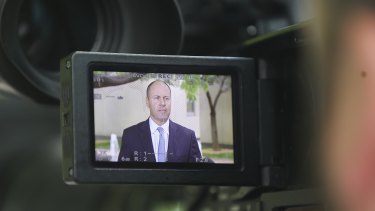 Google agreed to pay Nine more than $30 million in cash annually for five years for the use of its news content, in a major breakthrough after months of high stakes negotiations. Multiple industry sources who were unable to speak publicly due to confidentiality agreements said the deal is the largest agreement for news Google has signed in Australia to date. The two parties signed a letter of intent late on Tuesday, and a final agreement is expected to be sealed in the next fortnight.

Nine is the owner of The Sydney Morning Herald and The Age . It also owns The Australian Financial Review and a range of radio stations and television assets.

The media bargaining code will force Google and Facebook to strike commercial deals with news media companies within three months. Failure to do so could lead to an arbitration process and fines of up to 10 per cent of revenue. While media companies strongly supported the proposed laws, Google has threatened to turn of its search engine in Australia and Facebook has said it would ban news from its main platform if there are not changes. Google searches and Facebook’s newsfeed have become the main ways people access news online.

The flurry of deals means Google is now likely to avoid arbitration with major publishers. Guardian Australia and the ABC could both sign deals with the search giant this week sources said. Seven West Media struck an agreement with Google earlier this week. Youth website Junkee Media also announced on Wednesday it had struck a payment deal with Google.

Seven West Media announced at its financial results on Monday that it had signed a letter of understanding with the tech giant for use of its content, a deal which Seven sources say is valued at more than $30 million. The terms of the arrangement were not disclosed, but industry sources have indicated a proportion of the money is in advertising credits and a revenue sharing agreement for use of content on YouTube.

Separate industry sources said Nine’s deal is for the use of news articles on a variety of different products such as Google News Showcase and Subscribe with Google, a product that helps news outlets engage with subscribers. But it does not involve a revenue sharing deal for use of content on YouTube.

Nine declined to comment on the specifics of the deal.

“We continue to have constructive discussions with the digital platforms and when we have anything to announce we will do so to the ASX as is appropriate,” a Nine spokesperson said.

The deals that Google will strike with the news publishers are not for use of content in search. However, organisations have been willing to accept them in principle because the amount of money on the table is worth the same, or a similar amount, to what a company would have received for appearance of content in Google search.

News Showcase is a newly launched product available through Google’s news app. Google pays publishers for certain behind-the-paywall articles that then appear on the platform. The deals with Nine and Seven are in addition to already struck commercial deals with local publishers for its Showcase product, including Crikey, The Saturday Paper and Australian Community Media, publisher of The Canberra Times.