General Motors factories aren’t about to start churning out ventilators.

But some smaller manufacturers that supply parts for GM vehicles are about to shift production in order to help companies already making ventilators produce even more of them.

That could make a real difference, especially if more suppliers do the same.

GM is working with another Detroit-area manufacturer, Meridian Lightweight Technologies Holdings, to obtain foam and metal parts and send them to ventilator manufacturers, according to a report in Crain’s Detroit Business. Ford has said it’s in preliminary talks with the government to see how it can help as well.

Such efforts would require cooperation and coordination among supply and manufacturing firms that are typically rivals for work.

The effort requires cooperation and coordination among supply and manufacturing firms that are typically rivals for work.

“Usually we compete, but in this circumstance, we’re not competitors,” Joe Petrillo, director of North American sales for Meridian, told Crain’s.

The shipments could start as early as this week, according to Crain’s, and that wouldn’t be a moment too soon.

Ventilators are the devices that push and pull air through a tube connected to the lungs. COVID-19, the disease caused by the coronavirus, attacks the lungs, and people with severe cases need ventilators to survive.

The best estimates suggest that U.S. hospitals currently have close to 200,000 ventilators. But that includes older units, some of which may not work, and a supply from a federal emergency stockpile.

Projections suggest that supply might not be enough, and health care leaders and elected officials in parts of the country hit hard by coronavirus have said they already don’t have enough ventilators. New York Gov. Andrew Cuomo (D), among others, has been begging the federal government for help.

Auto industry leaders announced last week that they were eager to do their part. But the realities of ventilator production would make it difficult for, say, Ford or GM to start producing the machines quickly.

The process of building a car is not especially similar to the process of building a ventilator. Like any medical device, ventilators are subject to strict and careful oversight by government regulators. The fastest way to ramp up productions, according to many experts and engineers, is to have existing manufacturers add new facilities rather than to recruit new ones.

“From a technical standpoint, clearly companies like GM, Ford, and Tesla have the capability to assemble complicated machines like ventilators,” said Larry Smith, a retired medical device executive who is now director of graduate business programs at Rider University. “However, in the short-term, it seems to me that people that are already either making the subcomponents or doing the assembly could ramp up their own manufacturing more quickly than standing up brand new manufacturing from scratch.”

The story with the parts is a little different.

Vehicles and ventilators use many of the same components and subcomponents, from circuit boards and pressure sensors to valves and pipes. Although they must be custom-built and then checked by government regulators, that doesn’t have to take long ― especially if regulators can fast-track the process.

With the auto industry idling its factories as the economy slows down, suppliers are eager for the work.

“I have been getting inquiries from suppliers, asking how can we get involved, how can we help, can we make parts or can we sew things,” Julie Fream, president of the Original Equipment Suppliers Association, told HuffPost on Friday.

Ventilator manufacturers still face many challenges when it comes to ramping up production. They say they’re already running at or above their normal capacity, because of the unprecedented international demand for their products.

They may have to hire more workers, which would require both finding and training people. That may get difficult, in part because of the coronavirus pandemic and its effects.

“Folks are scared to come to work and in some cases they are bound to their homes,” a senior supply chain manager at one medical device company told HuffPost. “Finding people to do the work is a concern.”

And although a handful Midwest auto suppliers pitching in will ease the crunch on some parts, ventilators have hundreds of components and subcomponents. Experts have said for a while that a limited supply of these parts could slow down production.

But there are bound to be many more suppliers out there looking for work, especially with car factories curbing production. The same goes for companies that supply other industries, from aerospace to appliances that use the same kinds of components ventilators do. 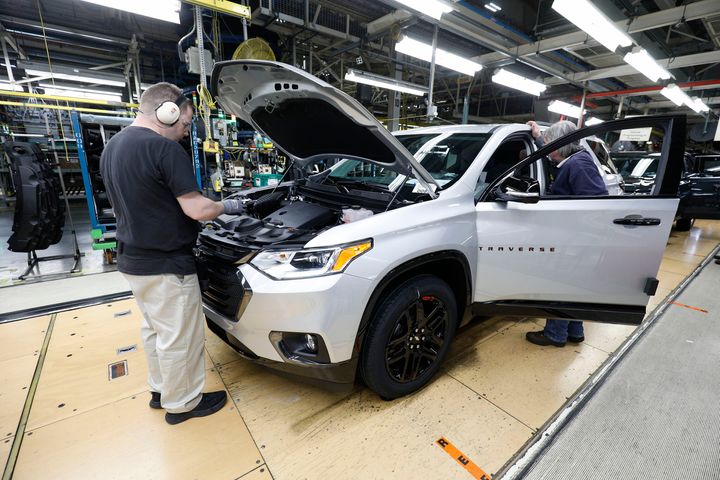 Major automative manufacturers may be able to help in other ways, because they have so much expertise in the logistics of producing a large amount of goods in a short time.

GM announced last week that it was working with a Ventec, a Seattle-based ventilator company, to increase production. Ventec is a smaller firm ― at least, relative to large ones like General Electric ― and the announcement mentioned specifically “logistics, purchasing and manufacturing expertise.”

“The global scale of what the auto industry does on a day-to-day basis is just orders of magnitude larger than almost any other industry,” said Kristin Dziczek, a vice president at the Center for Automotive Research. “Their supply chain and logistics systems are highly refined, they know how to get around bottlenecks in supply and distribution.”

Michigan Gov. Gretchen Whitmer (D) has said she thinks there are myriad opportunities for the auto industry to help with ventilator production. Like Cuomo, however, she has also said the need is urgent and would like to see more action ― and coordination ― from the federal government.

“I’ve got to solve problems, and I need the federal government to help me make sure that I’ve got what we need for our frontline providers, in particular, but also ventilators for people that are going suffer,” Whitmer said on ABC’s “This Week.”

One way Trump could potentially help is by using authority under the Defense Production Act. Among other things, that would give government orders for ventilators priority over existing contracts. Trump has so far resisted taking that action, with administration officials saying it’s not necessary given what the private sector is doing on its own.

The federal government could also help by getting a clearer sense of what ventilators are available and how many the country might need, and then making sure the machines get to the areas of greatest need. Typically the Federal Emergency Management Agency would be overseeing those efforts.

But Trump did not make an official disaster declaration until March 13, so FEMA only took charge of the response last week.