One airline chief executive taking a pay cut is an eyebrow-arching moment. Two? Well that looks like canny theft of a good public relations idea. A third travel industry boss following suit feels like the start of a #mepaycuttoo movement.

Sure. We have seen this industry-wide executive remunerations cut before in the banking sector. But that was all about punishment for the costly losses shareholders had to endure when financial services companies made huge mistakes. Many of them lost more than a slice of salary – they forfeited their jobs and reputations.

This time is different. It's a virus rather than management ineptitude. 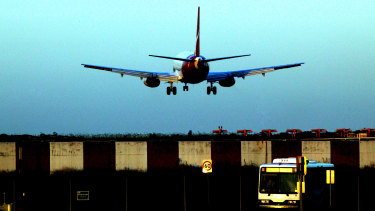 Airline executives are feeling a bit of pay pain.Credit:Rob Homer

(And readers, before you begin typing comments that these executives are already well paid and won't go hungry, let me say I agree.)

It kicked off earlier this week with Air New Zealand boss Greg Foran who voluntarily offered to cut his $NZ1.65 million ($1.60 million) base pay by 15 per cent – duration not specified. The following day Qantas chief executive Alan Joyce joined the party and upped the ante, announcing he would take no salary for the remainder of the financial year – ie until the end of June. His chairman Richard Goyder will also forgo his fees over the same period, the board will take a 30 per cent pay cut and Joyce’s senior direct reports will take a 30 per cent pay cut for the next three months.

On Wednesday Webjet managing director John Guscic said he would voluntarily cut his salary by 20 per cent and the board would take the same sized haircut on fees until conditions returned to normal. And Guscic would not be receiving any bonus this year.

Flight Centre’s Graham Turner (who consistency rates towards the top end of the executive salary league tables) and Virgin Australia boss Paul Scurrah (who must be questioning his luck in taking the job last year) must be feeling the heat.

How big an impact these salary sacrifices will have on the overall costs of their businesses is not especially clear. For example, Qantas didn’t quantify it other than to say it could be in the tens of millions and all would be revealed in its annual report.

In theory the amounts could be far larger if bonuses were abandoned. But that depends on how bonuses are calculated and the extent to which they are based on financial metrics.

All three companies conveyed in the recent spate of announcements that financial year 2020 would be pretty horrible in terms of earnings. Qantas has produced some forecasts around this. For example, the coronavirus will cost the company’s earnings up to $150 million. And realistically this could be revised.

Air New Zealand and Webjet have abandoned any pretence of being able to quantify the impacts of the virus on their financial performance. One can’t blame them given the duration of this health-related crisis is unknown. So there is a good chance that all travel industry executive bonuses would be under pressure this year.

Aside from executive pay cuts helping trim corporate expenses, there is a better reason for getting on the sacrifice bandwagon. They have, or are likely going to, ask their normal salaried staff to bear plenty of the weight in cutting costs.

Already most have implemented plans to have workers take their paid holidays and long service leave during this slowdown period – regardless of whether it suits their circumstances. Additionally, some are calling on workers to take unpaid leave. This, in theory, will stave off any need to offer redundancy packages. Qantas, for example, has 2000 in surplus staff thanks to the capacity cuts already announced.

And if any of the travel companies need to axe staff, it would not be a good look for the senior executives to be wearing no pain. As public relations exercises go – this is a no-brainer.

Of course, travel-related companies are at the front end of those whose earnings will be impacted by coronavirus. They will be more significantly affected than most but there has been a steady stream of companies calling out earnings revisions for the 2020 financial year based on reduced demand from nervous consumers and supply chain disruptions. Chances are there will be more contagion as we head into the Australian winter.

Those executives who receive bonuses based on financial measures such as total shareholder returns or return on equity or even earnings per share will see total remunerations packages suffer.

Whether they join the travel industry in cutting base salaries in response to the crisis or if they sack workers is something to watch.

The #mepaycuttoo movement is something most will be reluctant to join.