Home » World News » Grand Designs: House of the Year – from a flood-proof home to bespoke property on a budget

Grand Designs: House of the Year – from a flood-proof home to bespoke property on a budget 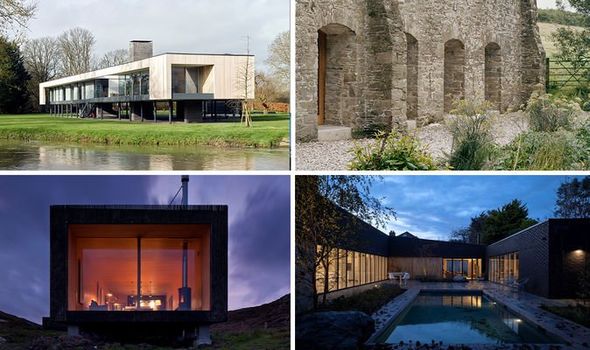 Grand Designs presenter Kevin McCloud was joined once again by architect Damion Burrows, and design expert and writer Michelle Ogundehin, to explore five homes across the UK that battled it out to be included on the RIBA shortlist. Each week, the experts will be exploring homes in four distinct categories. Last week, Kevin, Damion and Michelle viewed homes that were made from “exquisite materials”.

Episode three saw them explore homes that “solved problems”, speaking to the homeowners that live in them and the architects who designed them.

Kevin said: “The buildings in this category are all ‘problem solvers’ in their own way.

“Think of them as champion chess players or as master generals. Experts in tactics and strategy, able to overcome obstacles at every turn with brilliant ideas.

“Whether it’s through a single stroke of genius or hours and hours of painstaking trial and error.

“These buildings have all taken on a challenge and not just risen to it but transcended it.”

Every week, Kevin will unveil which houses the RIBA judges have put through to the shortlist.

The final episode will reveal the overall winner of the most coveted prize for residential architecture in the UK.

Living by the river is a dream for many of us but the reality can be much more brutal, especially when the weather is bad.

You can find your home flooded and irreparably water-damaged.

On a flood plain by the River Loddon in Berkshire lies River House.

Designed by John Pardey Architects, this property is long, tall, and raised above the riverbank on two-metre stilts.

The house has been covered in silver cladding with a contemporary, glamorous interior.

The property spans a whopping 50 metres, end to end.

From west to east there are three bedrooms, two studies, a terrace, and a large open plan living space.

There’s also a guest bedroom with an ensuite at the back.

It’s home to Tony, a semi-retired consultant surgeon, and Charlotte, who works in the art world.

The couple dreamed of retiring to the river bank and enjoy the thrill of the river bursting its banks.

Charlotte said garden furniture gets “tied to the tree” and exerting else gets “put in the garage”.

“You cannot have anything under the house,” she said.

“And you can’t plant anything so gardening is a whizz really.”

Tony said: “You don’t realise about flooding until you live in it.

“It’s not like having a swimming pool at the bottom of the stairs, it’s actually fast-flowing aggressive water.

“If you come down the stairs into the flood, you really have to be very careful not to lose your footing.

“Wade to the car and then drive to the shops, fill up with bread and milk, drive back and hope for the best.”

The property is effectively a high-up bungalow and is “effortlessly elegant”, according to Kevin.

The home has 50-foot windows that span one side of the property, looking out onto the surrounding countryside and river.

The RIBA judges admired the owners’ “hands-on” approach, spotting their personal touch in the morning terrace requested at the eastern end and some of the interior details that echo the external cladding like the bespoke birch plywood cabinets that span the hallway.

Kevin said this house goes “above and beyond”.

Located on the northwest coast of Scotland, House in Assynt can only be accessed by an eight-mile, steep, single-tracked road.

The “beautifully-crafted home” was designed by Mary Arnold-Forster Architects and was built off-site before being transported in small sections to its final location.

The house is built as three modules with different functions.

The front pod is an open-plan living space with a kitchen/diner.

The largest of the rear pods houses a master bedroom with an ensuite.

The final pod is home to an additional bathroom and guest room.

Phil and Heather reside in the property and fell in love with the area after coming on holiday to the location in 2015.

Phil said: “I’ve always had a hankering to have a place somewhere in the middle of nowhere.”

Heather added: “There’s definitely none of the attractions of an urban centre.”

Phil said some people may ask “why did you do this?”

He said he just loves “this wilderness”.

The couple had no idea what they wanted to build but knew they wanted it to “feel right” in the terrain.

Having worked in the wild parts of Scotland for years, their architect Mary is at one with remote landscapes and is passionate about protecting them.

Mary said: “Who am I to break ancient rocks? That’s my feeling. I’m only here for a while. Let’s make a point not to do it.

“I managed to knit the building between the two headlands without breaking rocks.”

The building is rested on stilts, perched on a “barely there” concrete strip.

On the exterior, the property has charred timber cladding which is both dark and waterproof, helping the new building disappear into its setting.

Inside, the property could not be more different with swathes of natural light and wood surfaces.

The RIBA judges marvelled at the entrance hall which is lined in pine and silver fir which leads you gently to a show-stopping living room with a “view to die for”.

The property was built in a factory 70 miles away in 13 sections.

The module sizes were built according to the size of the road they were transported on.

One lorry with one driver delivered the modules to their final location.

The modules were then put together in just four days to create a remarkably efficient building that conserves energy.

The property is surrounded on all sides by overlooking neighbours but camouflages itself with a green roof and a black brick cloak.

It was built by property developer Paul and his wife Maria.

Paul said: “I considered doing architecture as a profession but discovered quite early on I didn’t have the talent or the patience to go and qualify.

“The next best thing was going and commissioning architecture.”

Kevin described the layout as “cunning”, overlooking the limitations of an overlooked sloping back garden location.

At the front of the property is a bedroom wing which leads to the kitchen/diner, living rooms and master bedroom.

The front wraps around a pool and courtyard which is in the centre of the space.

If the home had been built in the conventional way, the property would be in full view of eight or nine dwellings.

“We’re very mindful of our neighbours and wanted to make sure it wasn’t an imposition,” Paul said.

The U-shape layout allows the house to turn its back on those around it and magics a secluded sanctuary within.

The RIBA judges loved the “seamless” flow between the tranquil courtyard and the indoor living spaces.

The interior of the house is minimal, open, light and “perfectly white”.

The build took 15 months and it wasn’t an easy journey.

The project endured two of the wettest winters on record with one of the ground workers getting trench foot in his rubber boot.

Award-winning architect Carl Turner is the visionary behind this project.

This “ancient crumbling farm building” turned 21st-century barn conversion in deepest Devon is home to Richard and Dawn who fell for its romantic charm eight years ago.

Kevin described the property as a “barn conversion like no other” with “agricultural echoes”.

Richard said: “When we first saw it, we could just glimpse it through from across the field and it had this almost fairytale feel to it, quite enchanted with this ancient stone glimpsed through the trees.

“The spirit of the place just got us straight away.”

Dawn described the building as “castle-like”.

Their son Tom, of TYPE Studio Architects, was in the process of qualifying as an architect so he turned the vision into a reality.

Tom said: “I think a really good piece of architecture is really disciplined and restrained.

“It’s about honesty and expressing the new and old parts of the building.

“To create a home for people you know so well was a joy to do.”

When they first bought the building, there was no roof, the tops of the walls were falling down, trees were growing inside and there was no floor.

The layout is true to the original design.

Downstairs, where cattle once lived, there are two bedrooms, a bathroom and a kitchen.

The upper level is a lounge and dining area with a study and shower room on either end.

The upstairs is one large, open space unbroken by interior walls.

They respected the old shell of the property, and didn’t add any more openings.

Every element has down-to-earth beauty and is unfussy.

The RIBA judges praised the way every new addition sensitively builds on the barn’s history.

The property has “future-proof” design with lightweight sycamore room dividers that can easily be moved in years to come.

This home solves the problem of getting a bespoke, beautiful house on a budget.

The property’s owners are Jenny who works in the theatre, and Aki, a doctor who grew up in Japan.

They decided to build Simple House because they were struggling to find somewhere to buy in the city.

Designed by Haysom Ward Miller Architects, the property has simple, beautiful living spaces which are tailored to the homeowners’ needs.

The house makes the most of a modest infill plot, taking inspiration from Japanese courtyard houses.

There are two enclosed gardens, an open-plan living space, a master bedroom, bathroom, cloakroom and study that can be used as a guest bedroom.

When the couple were looking for a property in the city, houses were out of their budget as well as homes with gardens.

Aki said: “We were also at the same time, looking for a plot of land and we looked for about three years.

“They come up so rarely in Cambridge and finally this one came up.”

Jenny added: “I was really excited about the idea of starting from scratch and particularly the idea of fitting everything to your size.”

There are subtle nods to Japanese architecture that are in keeping with the surroundings.

The interior is paired-back and minimalist with the walls remaining unpainted and the beams exposed in order for Jenny and Aki to stick to their budget.

The RIBA judges were impressed with the couple’s strategic deployment of their budget and the level of design.

Grand Designs: House of the Year airs tonight on Channel 4 at 9pm

Episodes are available to stream on All 4