Virgin on Friday grounded all domestic flying except for a single Sydney to Melbourne return service operating six days a week. Qantas and its budget offshoot Jetstar continue to fly to each capital city but at a significantly reduced frequency due to travel restrictions put in place to slow the spread of coronavirus. 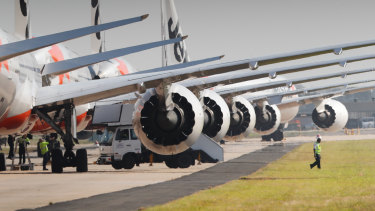 Jetstar planes being parked for storage at Avalon Airport, near Geelong. Credit:Jason South

Federal transport minister and deputy prime minister Michael McCormack said he was talking to both airlines about funding domestic flights to ensure routes between capital cities could remain open.

"We… need of course to transfer people around from capital city to capital city," Mr McCormack said in an interview with ABC television on Monday morning.

He said that included people who return to Australia on international flights, are then forced into quarantine in the city they fly into for 14 days and then have to return to their home city.

The government has already underwritten Qantas and Virgin relaunching a limited international network to bring stranded Australians home. The carriers will operate 13 flights per week from London, Los Angeles, Hong Kong and Auckland.

Returning more planes to the skies will be a welcome boost for Australia's two major airlines, which have been financially battered by travel restrictions put in place to slow the spread of coronavirus.

The debt-laden Virgin continues to push government for a $1.4 billion loan it says it needs to ensure it can make it through the crisis. However Qantas, which has a stronger balance sheet, has been pushing back against government help directed only to Virgin.

The government has so far announced $715 million in support for the major airlines in the form of waived fees and levies plus another $298 million package for regional carriers.

The Tourism and Transport Forum, an Australian industry group, estimates international and inter-state travel restrictions are costing the tourism industry $9 billion every month.