Sen. Kelly Loeffler (R-Ga.) drew backlash on Wednesday for soliciting campaign funds while speaking in the halls of Congress ― a potential violation of Senate ethics rules ― during an interview with Fox News.

Loeffler, who will face off against Democrat Raphael Warnock in a runoff election in January, warned Georgia conservatives that “hundreds of millions of dark, liberal money is pouring into our state” ahead of the contest.

“That’s why it’s so important that everyone across the country get involved,” Loeffler told Fox News with the pillars of the U.S. Capitol appearing behind her. “They can visit KellyforSenate.com to chip in 5 or 10 bucks, and get involved, volunteer.” 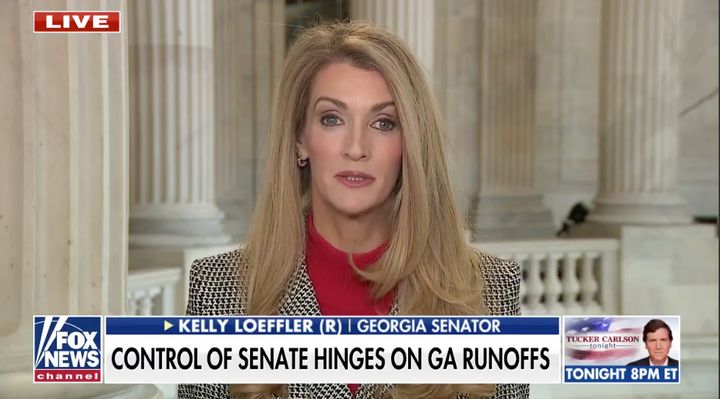 The Senate’s rules and standards of conduct for campaign activity prohibit Senate members and staff from receiving or soliciting campaign contributions in any federal building.

Loeffler’s campaign did not immediately respond to HuffPost’s request for comment.

It’s “yet another example of how Senator Kelly Loeffler is looking out for herself,” Floyd said in a statement.

“It’s been months since Senator Loeffler has taken action to help Georgians impacted by the pandemic,” Floyd added, “and instead of using her time in Washington to fight for coronavirus relief, she’s doing what she thinks is best for her political campaign.”

Sen. Lindsey Graham (R-S.C.), one of Loeffler’s top supporters in the Senate, drew similar scrutiny last month after telling reporters on Capitol Hill that his supporters should donate to his reelection campaign.

The South Carolina Democratic Party filed a complaint with the Senate Select Committee on Ethics, in which the party accused Graham of having “committed a crime and violated longstanding ethics rules by openly raising money for his campaign in a Federal government building while leveraging his official U.S. Senate activity.”

A spokesman for Graham’s campaign said at the time that “any possible violation” committed by the senator was “unintentional and does not represent a pattern of behavior.”

Loeffler, a former financial executive, assumed office in January after being appointed by Georgia Gov. Brian Kemp (R) to replace Sen. Johnny Isakson, who retired for health reasons. Georgia scheduled two Senate runoff elections for Jan. 5 after none of the candidates received at least 50% of the votes in their respective races this month. (Republican Sen. David Perdue will face off against Democratic opponent Jon Ossoff.)

The closely watched runoffs will determine whether Republicans maintain control of the Senate. If Democrats succeed in flipping both seats, the Senate would likely be split 50-50. Democratic Vice President-elect Kamala Harris would have the power to cast a tiebreaker vote.

Watch Loeffler’s full interview with Fox News below. Her fundraising comments begin around the 5:30 mark.