Getswift funding deal could hand control to US investor

Former market darling Getswift has tapped a US investor LDA Capital to provide an equity injection of up to $US45 million ($67 million) over the next three years, which could see the alternative investor gain a controlling stake in the last mile logistics provider.

In an announcement to the ASX, Getswift said the "put option agreement" with LDA Capital will fund growth and fend of threats like the coronavirus. Getswift had a cash balance of $57.7 million as of December 31 and reported customer revenue of $2.84 million for the half year. 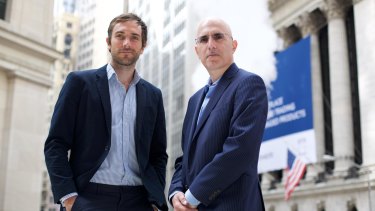 Getswift said the agreement gives it the right, but not the obligation, to draw down the funding and issue shares to LDA Capital at a price based on the stock's valuation around the time the put option is exercised.

Getswift will pay a commitment fee of $US900,000 and "pay financing fees customary for facilities of this nature in respect to the amounts drawn down under the agreement."

Getswift did not respond to requests for further clarification.

Substantial shareholder Charles Frischer welcomed the news, saying the $US900,000 cost compares favourably to the 5 to 7 per cent underwriting fee associated with a typical capital raising.

"The company has 36 months to take down the money and has the option to only do it at prices that make sense. So maybe if the shares move up to $1.00 per share, the company might be more willing to sell the shares," he said.

At this price, LDA Capital would end up with a 20 per cent stake, he said.

Getswift makes money by working out the best delivery route for clients, such as Red Rooster, to their customers, the so-called last mile of delivery. But it has failed to deliver meaningful sales.

The company's share price crashed in February 2018 after the company revealed that fewer than half the contracts it had been publicising were actually generating any revenue.

The company is defending itself and executives Joel Macdonald and Bane Hunter against a class action law suit and legal action by the corporate regulator.