The former Australian head of the world’s largest cryptocurrency exchange Binance has called for greater regulation of crypto trading platforms as more institutional and retail investors begin to eye off digital assets such as Bitcoin and Ethereum.

Jeff Yew, who resigned as Binance Australia’s chief executive officer in April, said he believed while Australia was more advanced with its regulation compared with other economies, much more still needed to be done to prevent everyday investors from being exploited by dodgy operators. 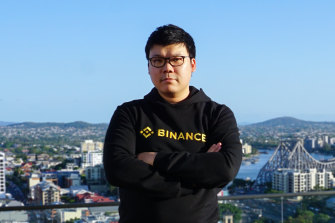 Jeff Yew, the former CEO of Binance Australia, has called for more regulation in the crypto spaceCredit:

“It really hurts me to see players exploiting that lack of [regulatory] clarity with users,” he said. “That’s not what we want to see when you’re talking about long-term progression of the crypto sector in Australia.”

Cryptocurrency exchanges – online platforms where investors can buy and sell assets such as Bitcoin – are almost entirely unregulated in Australia, with operators only required to be registered with the financial crime watchdog AUSTRAC for anti-money laundering purposes.

Mr Yew left Binance to launch Monochrome, a cryptocurrency fund open to institutional investors designed to make investing in the space easier. He believes it is strange funds such as Monochrome, available only to sophisticated investors, are subject to more regulation than exchanges aimed at often far less financially-savvy retail investors.

Mr Yew is not the only prominent figure in Australia’s nascent cryptocurrency industry calling for more regulation, with the heads of other major exchanges such as BTCMarkets and Independent Reserve making similar comments.

Binance’s global operations, which processes over $US55 billion ($71 billion) in crypto trades every 24 hours, has been subject to a number of regulatory inquiries, including from the United States’ Internal Revenue Service (IRS), Commodity Futures Trading Commission (CFTC) and the Department of Justice.

The former Australian boss noted that, broadly, those sorts of investigations would help strengthen the crypto industry, saying that “robust systems and robust policies” were essential for giving confidence to both retail and institutional investors.

The latter is who Mr Yew is hoping to attract through Monochrome, which officially launched on Monday. The fund, which operates as a unit trust and requires a minimum $50,000 investment, is targeting high net worth individuals and family offices, along with superannuation funds. For now, the fund will prioritise Bitcoin as its main investment.

“If you expect institutions to throw their whole self into the space and start learning about technology and [private] key management and custody, that’s not going to happen for while,” he said.

“Monochrome is a way of bridging that gap to leapfrog Australia into the institutional race in Bitcoin adoption globally.”

The fund is in the midst of signing on new investors and Mr Yew hopes to have $10 billion in funds under management by the end of 2022. Hitting this target is heavily reliant on the unpredictable price of Bitcoin which has fallen 40 per cent in the last two weeks after hitting a new high of over $80,000 in mid-April.

Start the day with major stories, exclusive coverage and expert opinion from our leading business journalists delivered to your inbox. Sign up here.