Florida Surgeon General Joseph Ladapo accused the Biden administration of “actively preventing the effective distribution of monoclonal antibody treatments” in the United States, according to a Tuesday letter addressed to Secretary of Health and Human Services Xavier Becerra.

The Biden administration recently paused shipments of COVID-19 antibody treatments manufactured by major drug companies Regeneron and Eli Lilly amid claims that such treatments are not effective against the omicron variant of the coronavirus.

The federal government continues to supply Sotrovimab, a monoclonal antibody from the company Glaxosmithkline, which reportedly does work against omicron.

Ladapo concluded his letter by referencing comments Biden made Monday that there wasn’t a solution by the federal government to end the nearly two-year-old pandemic.

“There is no federal solution. This gets solved at the state level,” Biden said at the time in response to Arkansas Republican Gov. Asa Hutchinson warning the president against letting “federal solutions stand in the way of state solutions.” 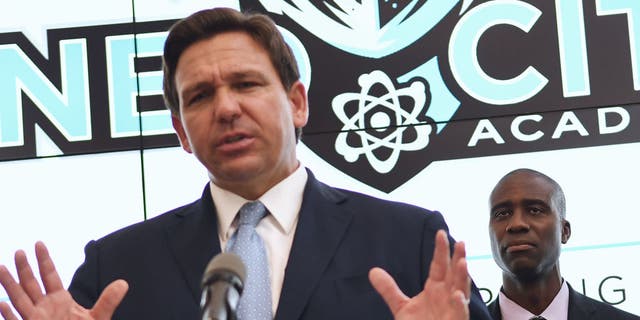 Ladapo, whom DeSantis appointed in September after the former surgeon general resigned, has also made headlines for opposing measures such as school mask mandates.

In September, Florida Gov. Ron DeSantis hammered the Biden administration for overhauling the distribution of monoclonal antibodies in a way that will severely hamper the treatment’s availability in several Republican-controlled states.

The Department of Health and Human Services alarmed authorities in several southern, red states — where the antibodies are widely used — after announcing that the agency would be changing how the COVID-19 treatment is distributed.