Australia’s largest travel agent, Flight Centre, faces a long-term decline in its leisure business as holidaymakers shift to making more bookings online and directly with airlines after the pandemic, according to one market analyst.

Morningstar’s Brian Han says the threat the $3.6 billion group faces from online competition is growing as its retail network loses relevance with consumers, after it closed about 400 of its almost 1000 local brick and mortar stores in the first year of the COVID-19 crisis. 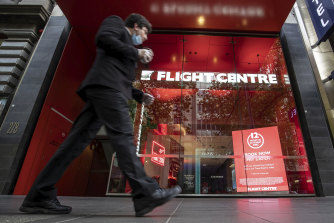 Flight Centre says that it is already making the shift online. Credit:Darrian Traynor

“Flight Centre has a strong network of services that has driven solid end-user traffic and bookings over the past 20 years, but we do not believe this is sufficient to protect the company against online competitors over the next 10 years,” Mr Han said in a research note published last week.

Flight Centre sold almost $24 billion worth of airline, accommodation and tour bookings in 2019, but the COVID-19 crisis almost brought it to its knees as travel was grounded globally. The ASX-listed outfit raised $1 billion in fresh debt and equity to ride out the crisis and suffered combined losses of $1.09 billion over the past two financial years.

Mr Han estimated Flight Centre accounted for more than a fifth of Australia’s $25 billion annual pre-COVID leisure travel bookings, but that would slide, with international holidaymakers the most likely to start booking directly with airlines or with rival online travel agents.

Leisure travel accounted for around 60 per cent of bookings pre-COVID with the balance coming from its growing corporate travel division.

Flight Centre managing director Graham Turner responded by saying the company’s own digital shift was well underway, with online bookings now accounting for about 20 per cent of transactions compared with 8 per cent before the pandemic.

“We are shifting business more into online, and when you look at places like the UK, North America and Europe, we have a significant leisure business but still a very small market share and we’re looking at growing that,” Mr Turner said.

Mr Turner said that except for a few larger airlines with near monopolies on certain routes, he expected carriers would continue to pay the same commissions given they would be competing fiercely for passengers.

Mr Han noted that Flight Centre continued to win accounts in its more profitable global corporate travel business, and that it had sufficient liquidity to ride out the pandemic as it continued to “wreak havoc on earnings”.

Shares in Flight Centre and other travel-related ASX stocks such as Qantas and Webjet have been volatile in recent months as hopes of a strong industry recovery grew towards the end of 2021 only for the spread of the Omicron variant to burst that optimism.