The rather sudden shift by some Democrats in support of identification requirements to vote has some critics pointing to liberal media members who long repeated talking points decrying voter ID laws as racist and discriminatory.

Despite previous stated opposition to voter ID laws, Georgia Democrat Stacey Abrams threw her support last week behind a national voting bill compromise proposed by Sen. Joe Manchin, D-W. Va., that would include voter ID requirements. Manchin’s proposal came in response to the sweeping For The People Act that would have effectively nullified voter ID laws in more than 35 states and was blocked via filibuster this week.

“Voter ID laws have proved popular despite Democratic arguments that they amount to voter suppression, and some activists have concluded that they do less to suppress the vote than they initially feared,” the Washington Post reported Tuesday.

It remains to be seen if liberal media language will evolve alongside Democratic rhetoric on the laws, given Abrams has long enjoyed darling status among the mainstream press. Examples of voter ID laws being labeled racist, discriminatory, or tantamount to voter suppression are almost too numerous to list.

In a Feb. 7 broadcast, an MSNBC graphic listed expanded voter ID requirements under consideration in different U.S. states as a measure that would restrict voting.

MSNBC’s Ari Melber fretted in October that 35 states had voter ID laws, saying it wasn’t about election integrity but rather to help Republicans. 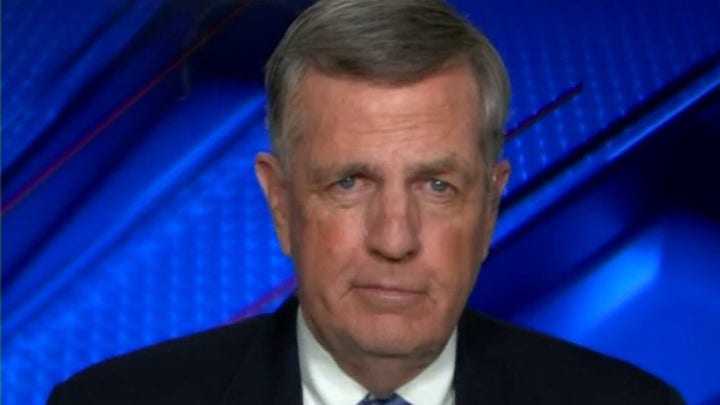 “The facts matter … It’s also wielded against a wider group of voters who are targeted as potential Democrats,” Melber said.

One CNN host last month was left confused when Rep. Liz Cheney, R-Wyo., defended voter ID laws, apparently thinking it didn’t jibe with her strong criticism of former President Donald Trump’s claims that the 2020 election was stolen from him.

“Liz Cheney, who has refused to lie about the outcome of the election and lost her job because of it, says these new laws are all okay,” anchor John Berman said, with an air of disappointment.

“They have tried to suppress and keep home through various measures like voter ID laws and things like that in this state that have suppressed the Black vote in Alabama,” Alabama Reporter’s Josh Moon told MSNBC in 2017, during coverage of the special Senate election won by Democrat Doug Jones.

CNN’s Chris Cuomo worried in 2017 that a Missouri voter ID law would produce a “chilling effect.” Shortly after the Trump administration took power in 2017, the Washington Post, ThinkProgress, and other outlets relayed a study claiming that voter ID laws skew elections to the right. The Post reported “our research shows that these laws lower minority turnout and benefit the Republican Party.”

But left-wing outlet Vox wrote later that year that the study was likely “bunk,” outlining that the original research’s surveys and calculations were deeply flawed. Indeed, Vox found that voter ID laws “have little to no impact” on minority turnout. The same liberal author reached the same conclusion two years later.

A “Today” segment in 2016 by former NBC journalist Ronan Farrow that wondered if new voter ID laws would result in limited voting. Overall turnout was up in that election, however, from 2012.

That hasn’t stopped continued liberal opposition to voter ID laws even up into 2021. The Washington Post’s Jennifer Rubin, one of the most and reliably sycophantic Democratic boosters in D.C. media, declared shortly after Biden’s election victory last year that he should “go after every voter ID law in the country.”

This week, Rubin praised Abrams for her “pragmatic decision to back the bill and bless a flexible voter-ID provision.” Since her call to get rid of all of them last year, she has embraced nuance on the topic, saying there are only certain types of voter ID laws that are unreasonable.

Even MSNBC’s Joe Scarborough mocked liberals on Tuesday who opposed voter ID before Abrams and former President Barack Obama got behind it, which comes as recent polls show an overwhelming majority also support people proving their identity before voting.