Home » World News » Fauci advises a return to schools for younger students: 'they do not transmit as readily'

Fauci advises a return to schools for younger students: 'they do not transmit as readily'

On today’s episode of ‘Justice with Judge Jeanine’, Jeanine blasts the teachers’ unions for refusing to re-open schools; plus, President’s Biden’s stance on crime has been soft compared to former President Trump.

Dr. Anthony Fauci believes that reopening schools for grades 8 and lower is a realistic target, but remains wary of returning high schools to in-person learning while coronavirus vaccines remain in short supply nationwide.

Fauci voiced strong support for reopening schools, but only for the lower grades with children who would not so easily spread the coronavirus.

“There have been a number of studies to show that when you have children that are of a certain age, namely … eighth grade and higher, that they transmit as easily as adults transmit,” Fauci told “Meet the Press” host Chuck Todd on NBC. “Whereas younger children … they do not transmit as readily.” 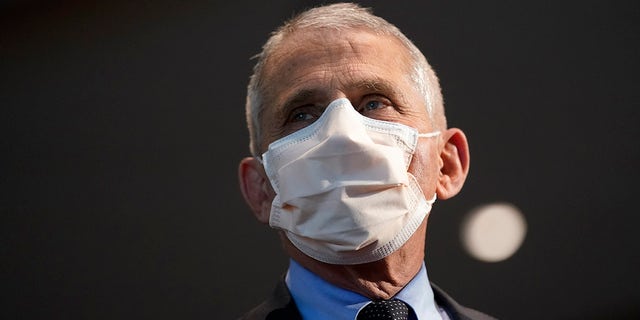 FILE – In this Dec. 22, 2020, file photo, Dr. Anthony Fauci, director of the National Institute of Allergy and Infectious Diseases, speaks before receiving his first dose of the COVID-19 vaccine at the National Institutes of Health, in Bethesda, Md. (AP Photo/Patrick Semansky, Pool, File)
(AP)

Fauci repeatedly referred to “some data” that backed up the claim, but more so pointed to President Joe Biden’s plan, the American Rescue Act, to help return younger grades to in-person learning.

The data, he insists, does not support high school students returning to in-person learning, as older students are more capable of spreading the virus at a level similar to adults.

Center for Disease Control (CDC) Director Rochelle Walensky on Wednesday said vaccines do not appear to be necessary for schools to open in person.

“I want to be very clear about schools, which is: Yes, ACIP has put teachers in the 1b category, the category of essential workers,” the CDC director said. “But I also want to be clear that there is increasing data to suggest that schools can safely reopen and that that safe reopening does not suggest that teachers need to be vaccinated in order to reopen safely.”

Fauci continued to urge vaccinations as the way to return to normal and get children back in school as soon as possible, but he acknowledged the problem that the government faces extreme shortages of vaccines.

“It’s just that the demand clearly outstrips the supply right now,” Fauci said. He later noted that it was “a bit inevitable” that a shortage would occur, saying that the government could have contracted “more aggressively.”

In some parts of the country, officials have entertained delaying the second shot for Pfizer and Moderna vaccines in order to more widely vaccinate the population as multiple mutated strains have started to spread in the United States.

Fauci continued to dismiss the idea – though not as strongly as he has in the past – saying “it would be nice to know” about the effects of one shot, but that the situation does not allow for such studies or exploration.

“It’s a reasonable idea,” he concluded. “I’m not putting the idea down, but it’s very impractical to do. It really is.”