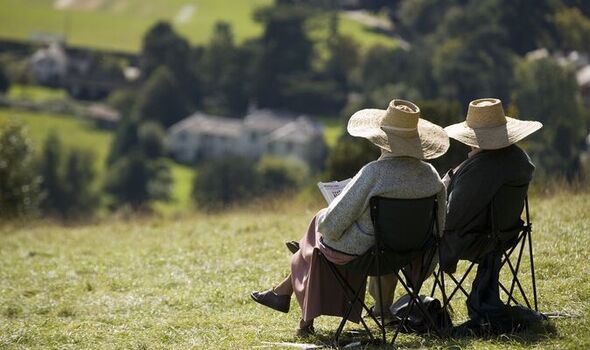 Campaigners want the next Prime Minister to scrap a rule which means the pensions paid to hundreds of thousands of Britons living abroad do not go up with inflation. Citizens who left Britain to be near relatives in old age have had their pensions “frozen” at the level paid when they moved out of the UK.

John Duffy, chairman of the International Consortium of British Pensioners, has written to Mr Sunak and Ms Truss in a bid to secure a change in the policy.

In his letter, he states: “Nearly half a million British pensioners living overseas are excluded from annual state pension increases in line with inflation because of where they live, with 90 percent of frozen pensioners living in Commonwealth countries. This means their pensions are effectively ‘frozen’ and fall in real value every year.”

He raised the case of 97-year-old Anne Puckridge, a World War II veteran who served in all three branches of the armed forces and moved to Canada at the age of 76 to be near family.

Mr Duffy said that if she had remained in the UK she would receive £134.25 each week. Instead, she has a weekly British state pension of just £72 and over the years “has lost over £22,000 because of this cruel policy”.

He also raised the plight of Inez Minc, 98, who served as a nurse during World War II in France and Germany, and “receives a UK state pension of just £40 a week in Australia”.

Under Government rules, pensions are only uprated in countries where a reciprocal arrangement has been negotiated.

Describing the situation as “incoherent and illogical,” he said in his message to the leadership contenders: “Where a British pensioner chooses to reside in their retirement should make no difference, whether it be the US, France, Bermuda, Canada, Antigua or Thailand. All British pensioners should be able to live in dignity during their retirement, having spent their working lives contributing to British society.

“Many of the affected countries, such as Canada, already provide fully uprated state pensions to their citizens living in the UK; it’s high time for UK pensioners living overseas to be given those same rights. These countries are ready and willing to begin discussions…

“I urge you to end the plight of frozen pensioners around the world, and end this shameful policy, should you become Prime Minister.”

She said: “It is shameful that thousands of pensioners worldwide have left without their proper state pension because of these outdated rules. This has been a political football for far too long.

“Sunak and Truss must both agree to put reciprocal agreements in place to ensure that pensioners who have lived and worked in Britain receive what they are fairly owed.”

Former pensions minister Baroness Altmann said: “The problem of Frozen British pensions has been a serious concern for many years, but unfortunately the UK Government has shown no sign of willingness to address this issue and the Courts have ruled that there is no obligation on the UK to uprate state pensions in countries which do not have bilateral agreements with us.

“It must be so hard for these pensioners to try living on a pension that is worth less and less each year in real purchasing power.  Some live in countries where there is means-tested help, so they do get some assistance from the government of their new country of residence, but they understandably feel it is most unfair that they are denied the increases they would have if they were living in Britain.

“They rightly say that they are not taking any other resources from the UK, no calls on the NHS or other public services, whereas if they moved back here it could cost the taxpayer much more.  But the legal position seems to have been clarified and no Government has committed to remedying the sit