At a time when doctors, nurses and health care professionals are working to exhaustion and risking their own safety to treat the COVID-19 outbreak, Fox News and other pro-Trump media outlets have repeatedly given a platform to dubious coronavirus experts with phony or misidentified medical credentials.

This week, Fox News host Laura Ingraham featured Dr. William Grace, who was billed as “an oncologist with Lenox Hill Hospital in New York City,” to talk about the use of hydroxychloroquine ― an unproven drug treatment that President Donald Trump has repeatedly praised.

Grace talked about the situation “in the trenches” and suggested that he had been administering hydroxychloroquine treatment, saying “we’re all using it, especially for desperately ill people.”

But while Grace is a doctor, he is not an employee of Lenox Hill Hospital, and it is unclear what firsthand knowledge he has of the crisis.

“He is not employed by Lenox Hill Hospital or Northwell. He is a private physician who has admitting privileges. His views are his own and do not represent those of our organization,” a spokesperson from Lenox Hill told HuffPost.

Grace did not respond to HuffPost’s request for comment on how he is involved in treating coronavirus, whether he has personally administered hydroxychloroquine or how he came to be identified as an employee of Lenox Hill.

Fox News issued a correction on one article citing Grace, noting it had incorrectly stated his relationship with the hospital. But another post with the transcript of Ingraham’s segment remains online without correction. Ingraham tweeted Grace’s claims about Lenox Hill, which were widely shared and picked up by other outlets. Ingraham did not issue a correction or delete her tweets.

Ingraham’s fellow Fox News host Tucker Carlson ― who has reportedly directly advised the president on his coronavirus response ― featured Gregory Rigano, a huckster who falsely claimed to be affiliated with Stanford University School of Medicine and several other institutions while promoting a self-published Google Doc paper on the benefits of chloroquine.

Carlson and right-wing radio host Glenn Beck both listed him as an adviser to Stanford ― a claim that the university has publicly refuted ― and their segments remain online without any correction.

While most of the medical community sounds the alarm about the virus and urges the public to do whatever it can to slow the spread, the pro-Trump media has backed the White House narrative that Trump has the crisis under control and that social distancing measures can be lifted sooner than health officials advise.

Few experts agree with that course of action. But to prop up Trump’s claims — whatever they may be at the time — some outlets are giving airtime to unreliable sources or sharing views outside the norm of the medical community.

Right-wing hosts have featured experts giving questionable advice that supports whatever Trump’s position is on the virus at the given time. On Sean Hannity’s Fox News show, contributor Dr. Marc Siegel claimed earlier this month that “this virus should be compared to the flu. Because at worst, at worst, worst-case scenario, it could be the flu.”

Medical experts and public health officials have widely condemned the comparison with the seasonal flu as inaccurate and downplaying the danger of the virus. Siegel also falsely stated that 300,000 people died of H1N1 “in the United States alone” during the 2009 outbreak. (The Centers for Disease Control and Prevention estimates around 284,000 people died worldwide from the H1N1 virus outbreak.)

Fox News has also repeatedly hosted talk show host and Trump health council adviser Dr. Mehmet Oz, who on Monday claimed without evidence during “Fox & Friends” that “I think a lot of doctors now are feeling the worry, the panic about coronavirus is going to be worse than the actual coronavirus for them.”

“For the first few months, we were saying, ‘Guys, wake up, this is a problem.’ Now the medical community is saying ‘Step it back for a second, you’re going to be fine,’” Oz said. 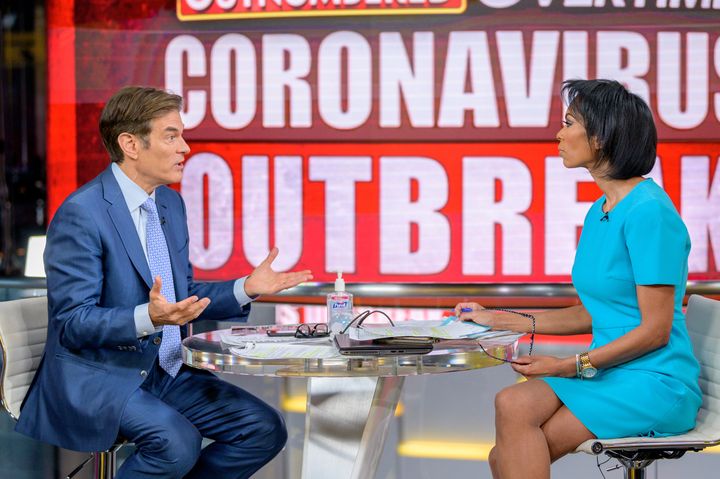 That is not the message from the majority of the medical community, which has been urging people to stay home to contain the virus and demanding action to address the lack of resources at hospitals. Doctors on the front lines of the crisis have detailed overwhelmed emergency rooms, patients waiting hours for care, and the situation worsening each day. There is a real concern from public health experts and officials that an unchecked surge in the outbreak could collapse health care systems.

Although Fox News may offer the biggest platform for it, misinformation is prevalent across the right-wing media ecosystem. The Federalist, a Trump-aligned outlet with notoriously unknown sources of funding, published an irresponsible article advocating for “voluntary infection” of coronavirus and likened the idea to “chickenpox parties” where parents gather their unvaccinated children to infect each other ― already a medically unsound practice.

The author, Doug Perednia, was credited as a “physician in Portland, Oregon,” but a Vice report found that he is not currently a licensed doctor and his primary expertise is in dermatology. Perednia claimed that The Federalist made unwanted edits that misconstrued his intent and that he did not advise such “chickenpox parties” for coronavirus, according to Mediaite. The article remains on The Federalist’s website without any correction.

Right-wing media promoting unproven coronavirus advice and dangerous practices can result in tangible harm to the public ― Fox News viewers also tend to be older and part of demographics more vulnerable to coronavirus.

Trump’s reliance on right-wing media for information also means that these outlets have the ability to influence policy. Earlier this month, an article from the conservative Hoover Institution that was reportedly shared among Trump’s inner circle predicted that no more than 500 people in the U.S. would die from the outbreak ― a death toll that has already been surpassed.

A day after Rigano appeared on Carlson’s show touting chloroquine, Trump praised the drug in a press conference and falsely suggested the FDA had approved it for treating the outbreak. Soon after, hoarders began depriving chronically ill people of a drug they take for its intended uses.

Pro-Trump media’s misinformation is enough of a threat to public health that even major tech platforms have stepped in to remove some content. Twitter locked The Federalist’s account until it deleted its tweet promoting coronavirus parties, while Google removed Rigano and Todaro’s paper for violating its terms of service.

These tech companies have long tried to avoid moderation if it may result in accusations of political bias, but even they have been forced to act against content that clearly goes against medical officials’ recommendations and makes claims about coronavirus that could threaten public health.