Donald Trump Jr. on his father's Sunday CPAC speech: 'People will be outraged'

DALLAS – Once again, the biggest draw will go last.

Just as he did at the Conservative Political Action Conference (CPAC) in Orlando in February, former President Donald Trump will close this weekend’s CPAC gathering in Texas by delivering the event’s headliner speech.

The American Conservative Union, which organizes the largest and most influential annual gathering of conservative activists and leaders, says that the former president will be the last major speaker at the three-day CPAC gathering in Dallas. Trump is scheduled to address the crowd at 3:35 p.m. CT.

Asked about the former president’s address, Trump’s eldest son teased that “with my father, you never know, right.”

“I can assure you it’s going to be interesting. I can assure you people will be outraged,” Donald Trump Jr. said in an interview with Fox News on Friday, ahead of his own speech at CPAC.

The conference comes as Trump, five-and-a-half months removed from the White House, remains extremely popular with Republican voters and continues to hold sway over GOP politicians, as he plays a kingmaker role in party politics and flirts repeatedly with another presidential run in 2024.

The conference also comes amid Trump’s most active schedule of events since the end of his presidency.

The former president traveled to Ohio two weeks ago to hold his first campaign style rally since leaving the White House. And he held a second rally a week later in Sarasota, Florida.

He also teamed up with Republican Gov. Greg Abbott at an event along the U.S.-Mexico border, in front of an unfinished portion of the border wall begun during his tenure in the White House. And this past week he held a news conference at his golf club in New Jersey to announce a lawsuit against Facebook, Google and Twitter, which have banned him from posting on their social media platforms. 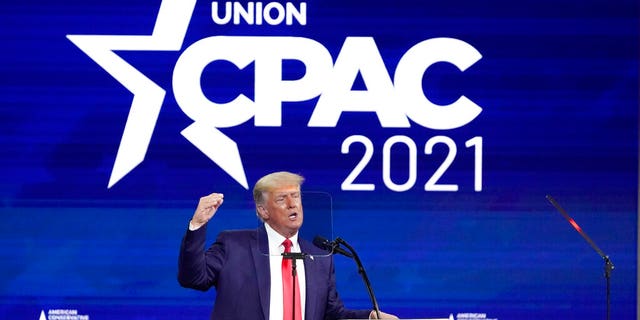 At his recent rallies, Trump took aim at his successor. He slammed President Biden, as he spotlighted the issues of crime and immigration, charging that “our streets are being overtaken by vicious thugs and bloodthirsty criminals,” and claiming that “our border is being erased before our very eyes.”

Trump also spotlighted the culture wars, arguing that “Critical Race Theory is being shoved down our children’s throats and into the ranks of our military.” And he zeroed in on the political battle over transgender rights, emphasizing that “men are allowed to play in women’s sports, so unfair, so crazy.”

American Conservative Union chairman Matt Schlapp told Fox News that Trump will also use his speech to emphasize “the fight against Big Tech and the fight against illegal immigration – the fight to fire Nancy Pelosi and Chuck Schumer.”

“I think he’s got masterful plan to do that, and I think that he’ll be sharing that with folks,” Schlapp said.

Fox Nation is a sponsor of CPAC and will be streaming live speeches from the most influential conservatives at CPAC 2021: America Uncanceled. Sign up on foxnation.com to hear their message to America.