Donald Trump Is An Urgent Threat To American Democracy. Congress Has 13 Days To Act.

President Donald Trump has 13 days left in office. After he incited an insurrection on Wednesday that left four people dead, some 50 injured and the U.S. Capitol ransacked, his enthusiasm for stoking violence from his supporters remains a threat to the nation’s democratic order as long as he sits in the White House. Trump may have been deemed too dangerous to post to his social media accounts, but he is still in charge of the executive branch, the military and the nuclear codes.

Now lawmakers must decide what to do about it ― whether they attempt another impeachment, try to remove the president from office using the 25th Amendment, or simply cross their fingers and hope for the best.

“We are in a very dangerous place in this country as long as Donald Trump remains in office,” House Speaker Nancy Pelosi (D-Calif.) said on Thursday. She added, “While it is only 13 days left, any day can be a horror show for America.”

Calls to remove Trump from office immediately have escalated among Democrats and Republicans in Congress since the Trump-inspired sacking of the Capitol. Dozens of Democratic lawmakers, including Pelosi and Senate Democratic Leader Chuck Schumer (D-N.Y.), and one Republican, Rep. Adam Kinzinger (R-Ill.), have called either for Trump to be impeached or for the Cabinet to invoke the 25th Amendment.

“This president should not hold office one day longer,” Schumer said in a statement on Thursday. “The quickest and most effective way — it can be done today — to remove this president from office would be for the Vice President to immediately invoke the 25th Amendment. If the Vice President and the Cabinet refuse to stand up, Congress should reconvene to impeach the president.”

Pelosi called for Vice President Mike Pence and the Cabinet to invoke the 25th Amendment. “If the vice president and the Cabinet do not act,” she said, “the Congress may be prepared to move forward with impeachment.”

Two drafts of articles of impeachment are circulating among House Democrats ― one introduced by Rep. Ilhan Omar (D-Minn.) and another written by Reps. David Cicilline (D-R.I.), Jamie Raskin (D-Md.) and Ted Lieu (D-Calif.). Cicilline, Raskin and Lieu serve on the House Judiciary Committee, which oversees impeachments. 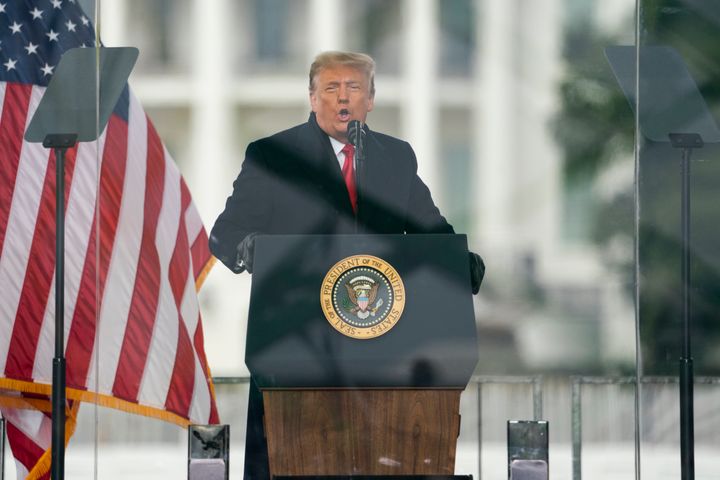 Impeachment leading to ouster may be challenging to pull off in the waning days of a president’s administration. The House of Representatives has never passed a “quickie” impeachment resolution. In the four prior presidential impeachment efforts, the process involved weeks, if not months, of preparation and hearings in the House Judiciary Committee, or another authorized committee. The House must then debate and pass the resolution. Finally, the Senate has to conduct an impeachment trial where House managers present their case and the president’s lawyers and representatives provide a defense. The length of time from Trump’s impeachment in the House last year to his acquittal by the Senate was 21 days. His remaining term in office is just 13 days, as of Thursday.

While Trump’s imminent departure may convince lawmakers not to pursue a fast-forward impeachment, there is a benefit to impeaching him even though he leaves the Oval Office in less than two weeks. If he loses at trial, the Senate is allowed to include a punishment that disqualifies him from holding “any Office of honor, Trust or Profit under the United States.” This would effectively ban Trump from running for president or any other federal office in the future.

In lieu of a quickie impeachment, there is talk that Pence and Trump’s Cabinet could together invoke the 25th Amendment in order to remove Trump from office and install Pence as acting president until Jan. 20.

Section 4 of the 25th Amendment provides for the removal of the president if he is incapacitated or unable to perform his official duties. It can be invoked in a vote by the vice president and a majority of the Cabinet. When the 25th Amendment is invoked in that way, the president is immediately removed from authority and the vice president assumes “the powers and duties of the office as Acting President.” The president may then respond by informing Congress that he is not incapacitated or unable to perform his duties. In turn, Congress must convene within 48 hours and then has 21 days to vote on whether to allow the vice president to remain as acting president. Both the House and Senate must approve by a two-thirds vote.

The above timeline is the reason why there are many calls for Pence and the Cabinet to invoke the 25th Amendment. Congress could theoretically delay its vote on a 25th Amendment invocation until Trump is out of office. This means he would be effectively removed from power for the remainder of his term.

Multiple news outlets have reported there are ongoing discussions in the Cabinet about the 25th Amendment. Pelosi did not say on Thursday how long she would wait for it to be invoked before turning to impeachment.

“I don’t know how quickly [Pence] will respond,” Pelosi said, noting that she hoped it would be by the end of Thursday.

Though Trump has always given succor to his most violent and dangerous supporters, he reached new lows this week in his quest to reverse his election loss and remain in power.

On Wednesday morning, Trump told his supporters ― a group made up of alt-right neo-Nazis, Proud Boys, Oathkeepers and QAnon believers, among others ― to march on the Capitol to stop lawmakers from certifying President-elect Joe Biden’s 2020 election victory and thereby to install Trump as an unelected ruler.

“We’re going to try to give our Republicans — the weak ones, because the strong ones don’t need any of our help — we’re going to try and give them [the] kind of pride and boldness they need to take back our country,” Trump said. 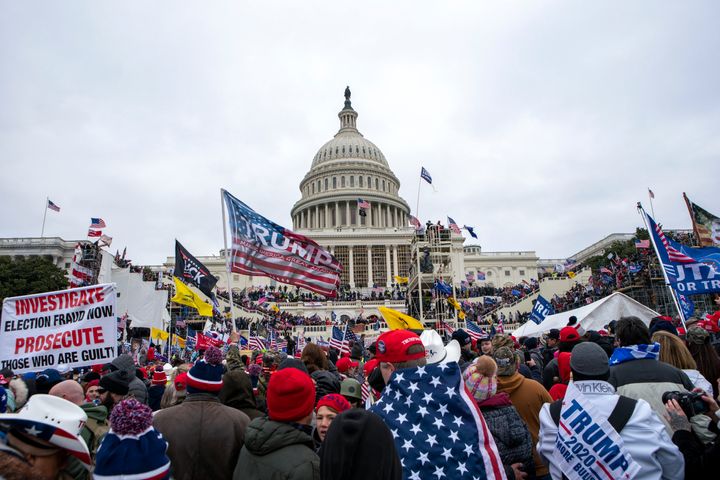 Trump was reportedly enthused about the ensuing chaos as it halted, at least temporarily, the counting of the electoral votes, according to multiple news outlets. In messages that led Twitter to suspend his account, the president reiterated his lie that the election was stolen from him and told rioters that they were “very special” and that he loved them.

“I know how you feel,” Trump added while suggesting that they “go home and go in peace.”

As this drama played out, the actual function and chain of command of government appeared to break down. When Pelosi called on the White House to deploy the D.C. National Guard to restore order, Trump denied the request. He would not send reinforcements to rescue lawmakers from the riot he incited. Pence, who had been forced to evacuate the Capitol where he was presiding over the electoral vote count, stepped in to authorize the guard’s deployment even though he had no authority to do so, according to CNN. This action raised the question of whether Trump actually remained the president of the United States.

At least nine White House aides or executive branch appointees have resigned their positions since the riot. Anonymous aides told The Washington Post that Trump was “a total monster” and “insane.”

While the Capitol building was cleared and Congress managed to certify the election result for Biden at 4 a.m. Thursday, the violent threat from Trump’s supporters and from the president himself has not abated.

As the Capitol was being invaded on Wednesday, police found pipe bombs placed at the Washington headquarters of both the Democratic National Committee and the Republican National Committee. A truck loaded with a semi-automatic long gun, ammunition and Molotov cocktails was found near the Capitol. On Thursday, multiple bomb threats were called into government buildings in several states, including the Michigan State Capitol. The secretary of the Army announced that a 7-foot-tall barrier would be erected to protect the Capitol from further danger ahead of Biden’s inauguration. Additional threats are proliferating on the conservative social media platform Parler.

This is the nature of the political movement that Trump has fomented. He may still escape these final 13 days with no accountability for what he’s done.