Didi shares plummet after China bans it from app stores

The Cyberspace Administration of China (CAC) — the country’s powerful internet watchdog — this weekend proposed that any company with data on more than one million users must seek the agency’s approval before listing its shares overseas. It also proposed companies must submit IPO materials to the agency for review ahead of listing.
The CAC cited concerns about whether data and personal information held by companies trying to list overseas could be “affected, controlled or maliciously exploited by foreign governments” after a listing. The agency said it will seek “public opinion” on the draft rules, which were published Saturday, before they are formally adopted. 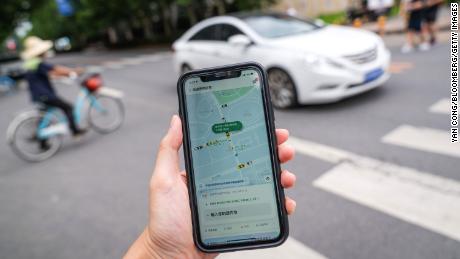 The move shows how much Beijing is broadening its control over the tech sector. The CAC is the same agency that banned Didi, China’s largest ride-hailing service, over “seriously violating laws” about data collection and usage, from app stores days after the company went public in the United States.

The CAC’s influence in China has ballooned over the years, since President Xi Jinping set up the agency as it currently operates in 2014 in the name of protecting China’s internet and data security. Xi’s move came after former US National Security Agency contractor Edward Snowden leaked US intelligence secrets in 2013, sparking a global firestorm over privacy and security.

The CAC on Friday also punished Didi even further, banning 25 of the company’s other apps and accusing them of violating laws around collecting and using personal information. The apps include Didi Enterprise, Uber China (which Didi bought from Uber in 2016) and other apps designed for different services, from ride-hailing to financial programs.
Didi said Saturday that it would comply with the regulator’s requirements and “rectify its problems.”
Didi’s stock clawed back some of its recent losses in New York on Friday, closing at about $12 per share. Even so, that’s below its IPO price of $14 — the equivalent of about $9.6 billion lost in market value.
Other Chinese regulators have been pressuring tech, too. Over the weekend, the State Administration of Market Regulation blocked Tencent’s plan to merge two of China’s top video game streaming websites, Huya (HUYA) and Douyu (DOYU). The regulator cited concerns that the merger would give Tencent — which is the largest shareholder in each website — too much control over the marketplace. Huya and Douyu are publicly traded in New York and have a combined market capitalization of $5.3 billion.

Tencent (TCEHY) said Saturday that it would cooperate with regulatory requirements and operate in compliance with laws and regulations.
Tencent’s shares declined 2% on Monday in Hong Kong, adding to the losses that have been mounting for months. The stock has declined more than 30% from a late January peak, shedding $294 billion from its market capitalization.
Source: Read Full Article