In media news today, Chris Cuomo stays silent amid growing scandal that revealed the liberal anchor turned to media sources for info on his brother’s sexual misconduct accusers, and CNN says it will have ‘conversations’ and seek ‘clarity’ with the television anchor.

CNN’s Cuomo ignored the growing controversy he’s engulfed in for his role in aiding his scandal-plagued brother during Monday’s edition of “Cuomo Prime Time,” despite airing as the media industry was shocked by newly released testimony showing a variety of ethical lapses for the journalist. 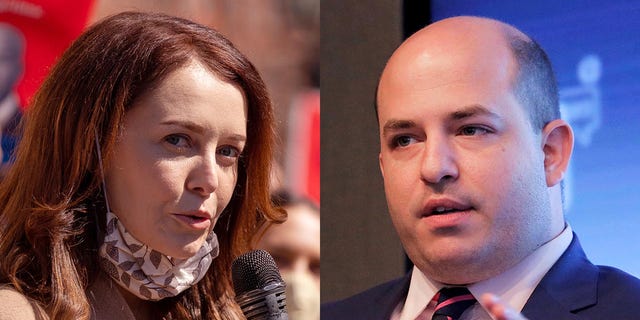 While Cuomo kept viewers in the dark, his colleague, Stelter, took to Twitter to defend his silence.

“For what it’s worth, when Chris Cuomo addressed his actions on the air back in August, he said ‘this will be my final word on it,’ and he hasn’t addressed the matter on TV since,” Stelter wrote.

Boylan, the subject of the March 18, 2021, piece written by Ronan Farrow in which she gave her first extensive interview about her claims of harassment and retaliation by the now-former governor, didn’t appreciate Stelter justifying Cuomo’s silence.

“What we mean when we say many people help in abuses of power along the way,” Boylan wrote, quoting tweeting Stelter’s defense of Cuomo. 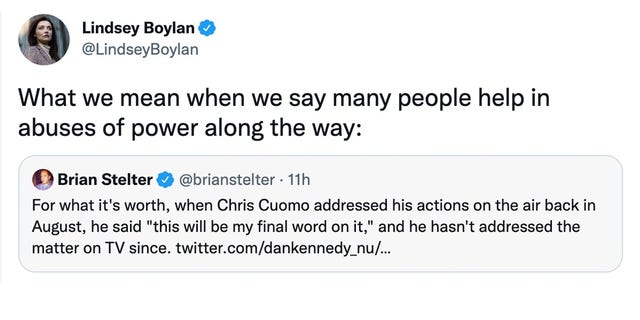 CNN did not immediately respond to a request for comment.

Boylan’s allegation made to Farrow in the New Yorker came months after her initial tweet that then-Gov. Cuomo “sexually harassed me for years.” Following that accusation, multiple other women came forward to accuse him of sexual harassment.

Stelter’s decision to rush to the defense of Cuomo is curious, as earlier in the day he offered a subtle but out-of-character admission regarding the bombshell revelations.

The newly-released testimony shows the “Cuomo Prime Time” host heavily worked with his brother’s inner circle to combat the sexual misconduct allegations against him, even relying on sources in the media on the reporting that was being done on the governor’s accusers including Boylan.

A report Stelter co-wrote covering CNN’s own scandal highlighted on-air comments Cuomo made in August following his brother’s announced resignation, telling viewers “I never attacked nor encouraged anyone to attack any woman who came forward. I never made calls to the press about my brother’s situation.” 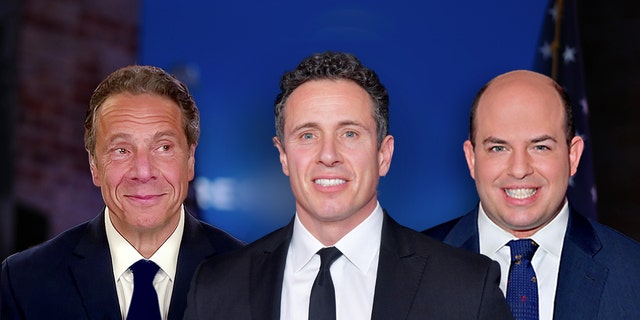 The newly-released testimony contradicts that on-air claim and CNN’s in-house media pundit was forced to admit it despite a longstanding reputation as media’s “janitor,” because he frequently cleans up after liberal journalists.

“Monday’s revelations cast some doubt on his statement about his interactions with the press,” Stelter co-wrote.

Stelter, who has previously defended Cuomo, was grilled earlier this year by “Late Show” host Stephen Colbert, who called out the “Cuomo Prime Time” namesake’s “odd conflict” of interest.

“It is an odd conflict,” Stelter acknowledged, “but I don’t think — if we open up the journalism ethics book, there’s no page for this. The craziest set of circumstances that you can imagine, right? A governor and a brother, both in these high-profile jobs. This is definitely awkward for CNN, though.”

At the time, Stelter also claimed Cuomo abides by journalistic boundaries after Colbert suggested the CNN anchor does not.

CNN has said it would review the newly-released testimony.

“The thousands of pages of additional transcripts and exhibits that were released today by the NY Attorney General deserves a thorough review and consideration,” CNN stated. “We will be having conversations and seeking additional clarity about their significance as they relate to CNN over the next several days.”

Fox News’ Joseph A. Wulfsohn contributed to this report.