Biotech giant CSL is in talks with the government about its longer-term role in Australia’s fight against coronavirus, as the company races to complete 50 million doses of the AstraZeneca vaccine by December.

The $123 billion blood plasma giant confirmed over the weekend that it was now producing more than 1 million doses of the vaccine per week, with more than 3.7 million doses released to the public by the end of April. There is a four-week quality control and approvals process that must be completed between when the vials are filled and when they are released for distribution. 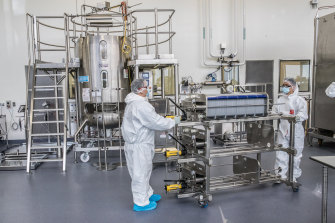 CSL is facing a tight timeline to deliver the rest of the 50 million doses it had agreed to supply by December, with 34 weeks left in the calendar year. However, a CSL spokeswoman told the Sydney Morning Herald and The Age the company was still focused on that goal.

“We continue to work towards the end of 2021 as the timeframe for the manufacture of our targeted 50 million doses,” she said.

“CSL has been continuously working to increase the number of AstraZeneca COVID-19 doses we can manufacture, with production now exceeding a million doses a week. This is an ongoing process of assessing refinements and improvements across the entire manufacturing cycle.”

The role of the AstraZeneca vaccine in Australia’s immunisation strategy has shifted significantly since CSL started making doses, with the prioritisation of Pfizer’s vaccine for those under 50 leaving many Australians waiting for Pfizer doses to arrive later this year.

The changed roadmap has once again put focus on Australia’s local manufacturing capabilities, with experts telling this masthead on Tuesday that producing new generation vaccines like mRNA products would require significant funding and the support for a major manufacturing partner.

CSL has previously indicated it is interested in mRNA development, but not until into the future once its current production requirements are behind it.

The CSL spokeswoman said the company is in talks with the government about its role in the pandemic after it completes its AstraZeneca production run, however.

A number of new candidates and COVID booster shots could flow into the Australian market in the coming years, including the Novavax vaccine, for which final data is expected in the coming weeks.

Last week, the Australian government confirmed it was still in discussions with a range of COVID vaccine manufacturers, including French biotech Valneva about its product, which has just started phase 3 trials.