Coonan says $2.5m job at Crown won’t be for long

Crown Resorts’ newly minted executive chairman Helen Coonan will be paid $2.5 million a year to try to steady the under-siege casino giant but says she does not expect to be in the role for long.

“I want to be clear I do not see myself as executive chairman for an extended tenure,” Ms Coonan said in a statement on Thursday morning. “We have already commenced a global search for a new CEO.” 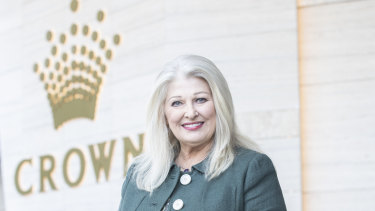 Helen Coonan said she does not expect to occupy the top job at Crown for long. Credit:Louie Douvis

Crown – which on Thursday revealed it had swung to a $121 million loss in the first half – said Ms Coonan, who was previously Crown’s chairman, would be paid an extra $1.8 million a year to take on the top management role. That brings her annual remuneration to $2.5 million, slightly short of Mr Barton’s $3 million annual salary before bonuses.

Ms Coonan said that while former Supreme Court judge Patrica Bergin’s report into Crown – the result of an exhaustive 18-month public inquiry – made for “uncomfortable reading at times”, the group saw it as “an opportunity for a complete and comprehensive corporate re-set”.

“We recognise the need for immediate and swift action and I would like to reiterate my commitment to driving the necessary ‘root and branch’ change that is required,” she said.

Crown would work with the NSW gambling regulator to try to reform itself to a point where it could finally open its new $2.2 billion casino at Sydney’s Barangaroo.

Three directors – Guy Jalland, Michael Johnston and Andrew Demetriou – have resigned since the inquiry’s findings were released, and Crown said on Thursday that company secretary Mary Manos would also resign after being criticised in Commissioner Bergin’s final report. 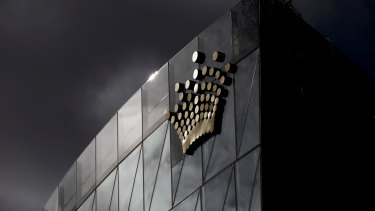 Crown has been blocked from opening its new Sydney casino. Credit:Bloomberg

Crown revealed on Thursday it tumbled to a $121 million half-year statutory loss after the COVID-19 pandemic forced it to close or restrict capacity at its Melbourne and Perth casinos.

The company reported a “normalised’ earnings before interest and tax loss of $131 million, down 155 per cent, for the six months to December 31. “Normalised” results remove the volatility of lucky or unlucky streaks on a casino’s gaming table and is the market’s most closely watched metric.

Revenue in its flagship Melbourne casino was down 90 per cent to $97.1 million, with main floor gaming revenue falling 91 per cent and its high-roller revenue falling 97 per cent due to the closure of Australia’s international borders.

Group revenue fell 62 per cent to $581 million. Crown did not declare a dividend.