Gen. Colin Powell, the influential former secretary of state and chairman of the Joint Chiefs of Staff who died last month, is being honored with a memorial service Friday at noon ET at Washington’s National Cathedral.

Powell, who played a pivotal policy role during the administration of President George W. Bush, died Oct. 18 at 84 from complications related to COVID-19, his family announced. He was fully vaccinated. He had also suffered from Parkinson’s disease and multiple myeloma, according to the family.

“We have lost a remarkable and loving husband, father, grandfather and a great American,” his family said in a statement last month. 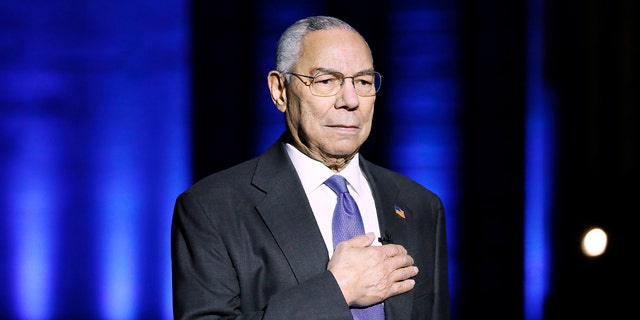 In this image released on May 28, 2021, Gen. Colin Powell on stage during the Capital Concerts’ "National Memorial Day Concert" in Washington, D.C.
(Photo by Paul Morigi/Getty Images for Capital Concerts)

Powell, the first Black secretary of state, served in Bush’s Cabinet from 2001-2005, including during the tumultuous years following the Sept. 11 terrorist attacks. The State Department described Powell, a Republican, as being “one of the foremost supporters” of taking “swift military action” against al Qaeda. Powell demanded “immediate” cooperation from Afghanistan and Pakistan in the U.S. effort to hunt down those responsible for the attacks.

By 2003, when the Bush administration’s focus had expanded to Iraq, Powell pushed for United Nations inspectors to investigate the claims that Saddam Hussein was manufacturing weapons of mass destruction. Powell presented intelligence to the U.N. in February 2003 that supported the administration’s claim that Iraq did have weapons of mass destruction and had the capabilities of producing more. In 2004, though, the State Department said some of the intelligence he presented was “found to be erroneous.” Powell, according to the State Department, felt military action should not begin “until a large coalition of allies and a long-term occupation plan were in place.” Despite his advice, the administration moved toward preemptive military action against Iraq.

Powell was born on April 5, 1937, in Harlem, New York. His parents were Jamaican immigrants and raised him in the South Bronx.

He attended City College in New York, where he began his military service by joining the Reserve Officer Training Corps (ROTC). Powell graduated at the top of his class with the rank of cadet colonel – the highest ranking in the corps.

He served for 35 years in the military, beginning as a second lieutenant in the U.S. Army. Powell was one of the 16,000 military advisers dispatched to South Vietnam by President John F. Kennedy in 1962.

He was awarded the Purple Heart, and later that year, the Bronze Star. Powell served a second tour of duty in Vietnam from 1968 to 1969. He was injured in a helicopter crash. Despite his own injuries, he managed to rescue his fellow soldiers from a burning helicopter and was awarded the Soldier’s Medal.

In total he received 11 military decorations, including the Legion of Merit.