While much of the program was focused on Biden’s handling of the coronavirus pandemic going forward, CNN anchor Anderson Cooper grilled the president on whether he agreed with House Speaker Nancy Pelosi, D-Calif, that Senate Republicans who voted to acquit former President Trump in his impeachment trial were “cowards” and whether he would allow his Department of Justice to investigate his predecessor.

Meanwhile, the scadal surrounding New York Gov. Andrew Cuomo over his administration’s withholding of data on nursing home deaths during the early months of the pandemic went unmentioned.

Cuomo, who Biden repeatedly praised during the 2020 election cycle, is facing bipartisan backlash after one of his top aides revealed that it had hidden the data from state lawmakers out of fear the damning figures would be used against them. 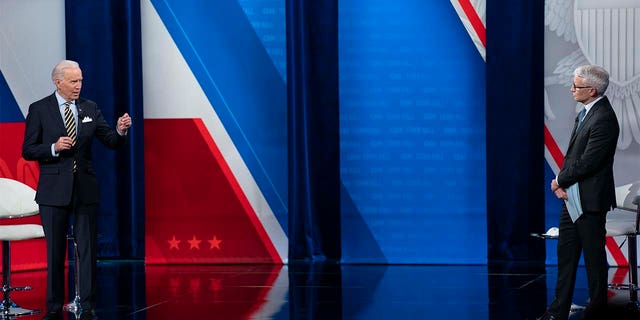 Also ignored during the televised event was the dramatic resignation of White House Deputy Press Secretary TJ Ducklo, who was forced to resign Sunday after it was revealed that he berated a Politico reporter with sexist language and threatened to “destroy” her for pursuing a story about his blossoming relationship with Axios reporter Alexi McCammond.

Biden came in for criticism during the fiasco, with critics pointed to comments he made last month warning administration appointees: “I’m not joking when I say this: If you’re ever working with me and I hear you treat another with disrespect, talking down to someone, I will fire you on the spot. On the spot. No ifs, ands, or buts.”

Ducklo was initially only given a one-week unpaid suspension after the story broke, which came three weeks after the White House communications staff was made aware of his conduct.

Cooper did, however, dedicatee the last several minutes of the town hall to ask Biden “what’s it like” to live in the White House.”

“Was it different than you expected it to be in some ways?” he asked at one point.

CNN was heavily criticized during the 2020 campaign for its “softball” town halls featuring the Democrat.