“An interesting debate is developing over how seriously we should take the rolling Trumpian coup,” Sykes writes. Here are six reasons to take it seriously:

HBO host Bill Maher went viral after he warned of Trump’s “slow coup” on “Real Time” Friday night. He delivered an eight-minute monologue premised on these three points: Trump “will run in 2024; he will get the Republican nomination; and whatever happens on election night, the next day he will announce that he won.”
Maher laid out a scary undemocratic scenario in the hopes of arousing viewers from slumber.
“I’ve been saying it ever since he lost, he’s like a shark that’s not gone, just gone out to sea,” Maher warned. “But actually he’s been quietly eating people this whole time.” Using a reference from “Game of Thrones,” a show in which power-hungry characters kill each other for the coveted Iron Throne, Maher clarifies his warning by saying, “And by eating people, I mean he has been methodically purging the Republican party of anyone who voted for his impeachment or doesn’t believe that he is the rightful leader of the Seven Kingdoms.”
MSNBC’s Mehdi Hasan reacted by commenting, “I wish more actual journalists would say what a late-night comedian’s saying.”
Coming at it from a very different ideological POV, “Allahpundit” of the Hot Air blog said Maher was right, “even if Republicans don’t want to hear it. And it’s a show of integrity on his part that he felt obliged to drop this truth bomb at the very moment that he’s gaining right-wing fans for his anti-woke commentary.”
Decide for yourself -— here’s the monologue.

How to help reverse ‘democratic decline’

Michael Abramowitz, the president of Freedom House, joined me on Sunday’s “Reliable Sources” to discuss democratic backsliding and how small-d democratic media can “hold the line,” as Nobel Peace Prize recipient Maria Ressa likes to say. “Independent journalism is a cornerstone of democracy,” Abramowitz said. “And without it you can’t have accountability for power…It’s the fact-based journalism, the focus on facts, that is really the way out for us.” 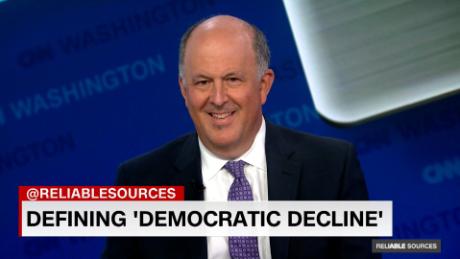 How to help reverse ‘democratic decline’

This was our “A block” conversation on Sunday’s show, with comments from James Fallows and Brittany Shepherd. Fallows said that when artificially created chaos is covered like “a naturally occurring phenomenon,” the audience loses. Watch: 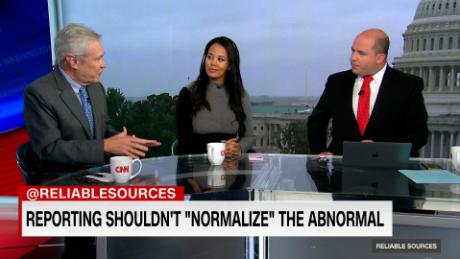 — Rep. Liz Cheney’s tweet over the weekend, mainly in reaction to Scalise: “Millions of Americans have been sold a fraud that the election was stolen. Republicans have a duty to tell the American people that this is not true. Perpetuating the Big Lie is an attack on the core of our constitutional republic.” (Twitter)
— ABC’s Jon Karl shared new reporting from his forthcoming book “Betrayal” on “This Week” Sunday: During the riot “the former president liked what he saw” and “boasted about the size of the crowd.” (ABC)
— “A whistleblower identifying as a former high-ranking US Capitol Police official excoriated the department’s leadership before, during and after the deadly January 6 insurrection in a new letter to Congress.” (CNN)

— Renee DiResta introduced a new term over the weekend: “Ampliganda.” It’s short for amplified propaganda. Get familiar with what it means. (The Atlantic)
— Related? The words “Civil War” trended on Twitter on Sunday after MSNBC aired a clip of a Trump rallygoer saying “I see civil war coming.” (MSNBC)
Source: Read Full Article