If you want an example of how keeping Wall Street happy can undermine your business, look at Boeing. And if you're also interested in seeing how already-well-paid corporate directors can get a raise while presiding over a horrendous mess that helped lead a company to need a federal bailout, you can look at how Boeing's directors gave themselves a $US20,000 ($33,000) raise (to $US366,000) last year from what they got in 2018. 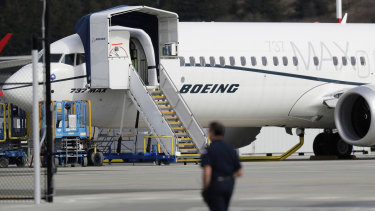 Boeing was already in serious financial trouble before the coronavirus hit. Credit:AP

And finally, if you want to see an act of utter cluelessness given what's going on in the US, look at how Boeing sent more than $US1 billion ($1.6 billion) of dividend checks to its shareholders three weeks ago, as the COVID-19 crisis and corporate bailout requests were both spreading.

It wouldn't have been easy or comfortable for Boeing to revoke or delay the dividend, which had been declared in December before COVID-19 became a household term. But the company didn't even try.

It's not clear how big a bailout Boeing will get or what its terms will be. The company was already financially stressed before the COVID-19 pandemic struck because the 2018 and 2019 crashes of two of its 737 Max planes had led to the worldwide grounding of what had been a huge moneymaker.

The COVID-19 pandemic, of course, greatly increased the financial stress on Boeing and the rest of the aerospace industry, on whose behalf Boeing had been seeking a $US60 billion bailout.

But Boeing wouldn't need anywhere near as big a bailout as it's likely to get if it hadn't spent almost $US60 billion – $US59.994 billion by my read of its financial statements – for dividends and stock buybacks from 2014 through 2019.

That was $US5 billion more than Boeing's free cash flow during that period, according to Dhierin-Perkash Bechai, who runs the Netherlands-based AeroAnalysis firm and is also an aerospace analyst for Seeking Alpha.

Free cash flow, a crucial corporate statistic, is what a company has left after paying expenses and reinvesting in the business.

"We can't say Boeing's practice is healthy," Bechai, whose recent Seeking Alpha post was the impetus for this article, told me in an email. "The way the company prioritises their cash usage left it with extremely little flesh on the bones to deal with dire times."

Increasing cash dividends and buying back stock in the open market are classic ways of "returning money to shareholders," as Wall Street calls it, and putting upward pressure on share prices. That not only keeps shareholders happy, but often helps enhance top executives' personal wealth and compensation packages.

Along with the share buybacks, which helped support its stock price indirectly, Boeing steadily increased its dividend to $US8.22 a share last year from $US2.92 in 2014. Those rising dividends and the prospect of future increases helped support the stock price directly.

Boeing kept its dividend intact in 2019 even after it suspended its buybacks because of looming financial problems. The reason, clearly, was to try to support the stock price. And, of course, Boeing paid that 2020 dividend on March 6 this year, just two weeks before the company announced that it was suspending dividends and buybacks, and its two top executives said they wouldn't be taking any pay for the rest of the year.

The recent dividend cost Boeing $US1.163 billion by my estimate, which made its financial hole that much deeper.

Boeing's lavish treatment of its outside directors didn't make any significant difference in its financial situation. But it says a lot about the company's priorities. 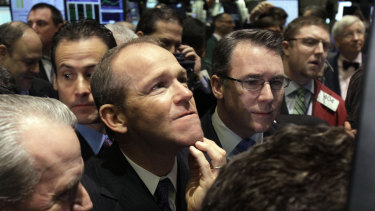 Boeing chief David Calhoun said the company wouldn’t take government money if it has to give taxpayers an ownership stake as part of the dealCredit:AP

But last year – which quickly turned into a disaster for the company, with its second 737 Max crash in March soon followed by grounding of all 737 Max planes – the directors had no problem accepting a raise. They got $US200,000 of stock, in addition to the cash and matching contributions. Their total package: $US366,000 a year.

Boeing chief executive David Calhoun said in a Fox Business Network interview on Tuesday that Boeing wouldn't take government money if it has to give taxpayers an ownership stake as part of the deal. "I have no need for an equity stake," Calhoun said. "If they forced it, we'd just look at all the other options, and we have got plenty." He said he preferred to get taxpayer loans and pay them back with interest.

It will be interesting to see if Trump's "probably" comes to pass and whether taxpayers, as they should, get a piece of Boeing's action. Or whether, yet again, Boeing will be able to give all the upside to Wall Street and short-change Main Street in the process.