Home » World News » Chuck DeVore: Biden's border crisis – Texas may have to defend itself. Here's why

Chuck DeVore: Biden's border crisis – Texas may have to defend itself. Here's why

Fox News ‘Outnumbered’ panel weighs in on Vice President Kamala Harris’ answers on the southern border in an interview with NBC.

The world wants to come to America and many in America – at least in the Biden administration and the Chamber of Commerce – want the world to come.

Nowhere is this more apparent than on the Texas-Mexico border, where the surge of would-be immigrants has completely overwhelmed the Border Patrol and local law enforcement. If current trends continue, more than 3 million people may stream into the U.S. by year-end, threatening Americans with lost jobs and crime.

I just finished a three-day fact-finding trip as part of a team sponsored by the Border Security Coalition. We heard from elected officials, law enforcement, active and retired Border Patrol officers, and local citizens in Val Verde County, population 50,000, situated 160 miles west of San Antonio at about the midpoint on the Texas-Mexico border between El Paso and the Gulf of Mexico.

Officials and locals say that Val Verde used to be a quiet part of the U.S.-Mexico border. Now Border Patrol intelligence analysts estimate that the Mexican crime cartels are banking $25 million per week from human trafficking alone in the Val Verde region. About a year ago, the cartels generated about $11 million per week. Given the collapse of border enforcement, prices to guide people illegally crossing the border have likely gone down due to the reduced risk to the cartels’ coyotes.

Local experts on the border situation say that the surge in crossings happened immediately upon President Biden’s taking office. Would-be immigrants told Border Patrol agents that Biden said he would be nice and let them in – they are merely taking the president at his word.

Many of the people crossing into the Texas town of Del Rio appear to have access to money. They claim to be doctors, engineers and other professionals from Venezuela, Haiti, Cuba and nations in Africa and the Middle East. But Venezuela, one of the world’s most corrupt countries, will issue a passport to anyone in only two days – for cash.

A volunteer at a Del Rio interfaith nonprofit that works closely with U.S. immigration authorities said that in a typical week last year, they processed about 20 immigrants per week, showing them how to purchase bus or plane tickets to move them away from the border and into the interior. In the week ending June 5, they expected to exceed 2,000 people, a hundred-fold increase.

In past years, Border Patrol agents would try to photograph, fingerprint and occasionally take a DNA sample to verify people claiming to be family units. Border Patrol would then issue a “Notice to Appear” to the migrant, ordering them to appear before an immigration judge at a certain date. In 2017, 43% of aliens with a court date failed to appear.

But because the Biden administration had no plan to replace the Trump administration’s policies, the tide of aliens has overwhelmed the entire immigration system. Now aliens who present themselves at places other than official border crossings are issued a “Notice to Report” by immigration officials and quickly moved away from the border, frequently with a lower level of ID checks.

A “Notice to Report” asks illegal aliens to report to a U.S. Immigration and Customs Enforcement office when they get to their destination in the interior. These notices to report have never been used before and, according to former immigration officials, may themselves be illegal, having no basis in U.S. law.

Biden is restraining U.S. Border Patrol and immigration officers from doing their jobs. It may be up to Texas to secure its own border.

But, issuing a “Notice to Report” takes less time than issuing a “Notice to Appear” and moving aliens away from the border and into the interior as swiftly as possible is crucial to prevent large crowds of immigrants at the border in the unlikely event the major media was to report on the Biden Border Surge. Dilution and dispersal are the key to hiding the massive numbers of people crossing into America.

While family units, unaccompanied minors – many of whom are young adults who claim to be 17 – overrun the more populated portions of the border, and willingly present themselves to the Border Patrol, other, more ominous people have been crossing into the sparsely populated areas of Texas. These, law enforcement officials say, are the bad guys, the “got-aways.” Sex offenders. Murders. Terrorists. They wear camouflage and carry rucksacks. If they are intercepted by Border Patrol agents or law enforcement, they will often fight to avoid apprehension. 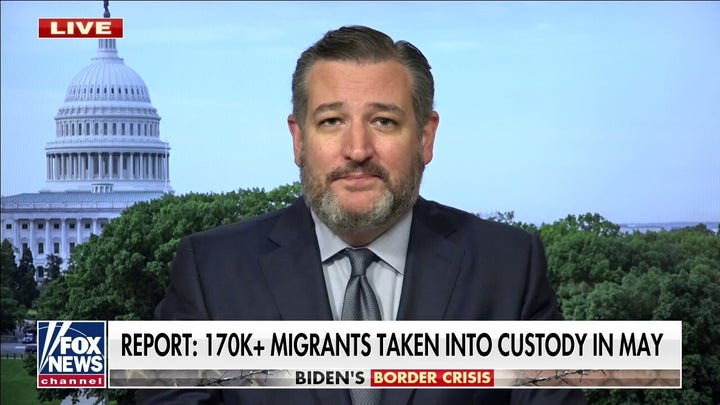 Prior to the border surge, Val Verde County had a very low crime rate. Now residents are under siege. They have been confronted in their homes and on their streets by illegal immigrants seeking food and shelter. Homes have been ransacked, cash and jewelry stolen.

And now Biden is expected to soon lift the Title 42 pandemic immigration restrictions imposed by President Trump. With Title 42 gone, the surge will further intensify.

Biden is restraining U.S. Border Patrol and immigration officers from doing their jobs. It may be up to Texas to secure its own border.

Texas Gov. Abbott has options to meet the challenge, from arresting migrants for trespassing and holding them in temporary facilities, to invoking a state of emergency allowing him to control vehicles and buildings in specific areas, “control of the movement of persons,” and establish curfews.

Either way, Gov. Abbott will likely be sued by the Biden administration and their allies on the left – but the governor will be on firm legal ground in defending his citizens from harm.