Just three weeks after lobbing a multibillion-dollar bid for petrol giant Caltex Australia, British-based EG Group has made a play for health-conscious fast-food network Oliver’s which runs restaurants in 25 service stations around the country.

EG’s non-binding, conditional 10¢ per share takeover offer for Oliver’s Real Foods values the company at $25 million, a 3.5¢ premium to its closing share price of 6.5¢ on Tuesday.

The $25 million price tag on offer for Oliver’s is small change compared to EG’s $3.9 billion cash and shares bid in February for Caltex, an offer rejected by Caltex's board earlier this month. 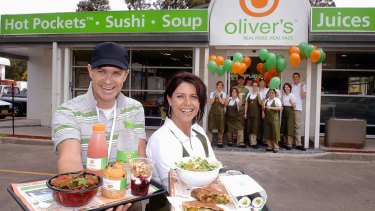 Oliver’s downsized the number of quick service stores it operates along Australia’s eastern seaboard from 29 to 25 over the half year.

“After careful assessment, the board of Oliver’s had determined that engaging further with EG Group is in the best interests of shareholders,” Oliver’s told the ASX on Wednesday.

The restaurant group, which only sells organically certified food in its service station outlets, is in advanced discussions with EG. Oliver’s chairman Nick Downer said discussions “are ongoing” but there was no assurance they would result in a formal takeover offer to shareholders.

EG, or Euro Garages, is still in discussions with Caltex about its offer alongside another takeover contender, Canadian convenience giant Alimentation Couche-Tard.

Privately-owned EG entered Australia in 2018 with the acquisition of Woolworths' petrol stations for $1.7 billion. Controlled by UK billionaire brothers Mohsin and Zuber Issa, it has grown rapidly beyond its European base through acquisitions over the past few years.

Oliver’s reported earnings before interest, tax, depreciation and amortisation (EBITDA) profit of $44 for the first half of the 2020 financial year after one-off costs of $992,000, a $10.3 million improvement on the loss recorded for the same period the previous year.

The company downsized the number of quick service stores it operates along Australia’s eastern seaboard from 29 to 25 over the half year. “Sales revenue for this period, whilst only marginally lower than the previous year, was disappointingly lower than the company's internal forecast,” according to its half-year report.

In a bid to improve profitability, Oliver's will close another store in Coffs Harbour next month.

It attributed the slump in sales, profitability and revenue to the bushfires in Victoria, NSW and Queensland which resulted in road closures, store evacuations, power outages and travel warnings.

The company also owns and operates the Red Dragon Organics brand which produces specialist drinks for Oliver's stores and distributes to 500 other retailers and cafes nationally.

Oliver's stock jumped to 8.5¢ a share when trading resumed after 11am on Wednesday.