The parent company of upscale fast food outlet Betty’s Burgers has taken a swipe at rival chains for their overcomplicated menus as the business prepares to add new meatless options and capitalise on Australia’s economic reopening.

The beachside burger chain has been a rare beneficiary of the COVID-19 pandemic, shrugging off the impact of lockdowns which caused many other chains to languish. After posting $83.2 million in revenue in the 2021 financial year (up from $68.9 million in 2020), Betty’s Burgers has high hopes to expand from 39 to 150 stores across Australia. At least five new ones will be open by Christmas. 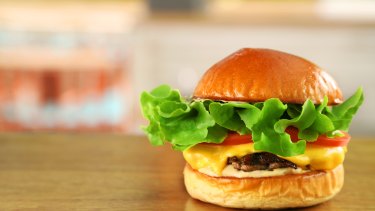 Betty’s Burgers will have more meatless and vegan options in the coming months.Credit:

Betty’s Burgers competes with the likes of Grill’d in the premium end of the burger market, as distinct from mass market chains such as McDonald’s and Burger King.

“I don’t want to specifically call out any of our competitors, but when you have a menu that’s got 500 items on it, it’s just way too difficult to manage,” Retail Zoo CEO Nishad Alani told the Sydney Morning Herald and The Age.

Parent company Retail Zoo, which also owns the Boost Juice, Cibo Espresso and Salsas chains, has been widely linked with rumours of a float on the ASX. Its private equity owner Bain Capital explored a listing in 2019. A company spokesperson said any decision regarding an IPO “is in the hands of our shareholders.”

According to Mr Alani, diving deeper into the alternative meat movement will be a key growth driver for the business. The Betty’s Burger menu currently features two non-meat options, one with a crispy puff rice patty and another with mushroom.

“You’re going to see a lot of innovation,” Mr Alani said. “What you’re going to see within the next 3-4 months is a real step up from Betty’s Burgers around options, particularly when it comes to meatless and vegan … we know that’s the trend.”

Though meatless options are on the agenda, he signalled its introduction to the carefully curated menu would be measured.

“What I have to be very careful about is managing the complexity in our restaurant. When you’re growing at a fast rate, and you’re adding innovative menu items, you’ve just got to make sure you do it in a methodical, well-planned way.”

As concerns about climate change and sustainability reach fever pitch, consumers are hungry for environmentally friendlier options. Australia’s $185 million plant-based meat sector is projected to reach $3 billion by 2030. On a global scale, the market for alternative meat could exceed $189 billion by 2029, Barclays analysts believe. 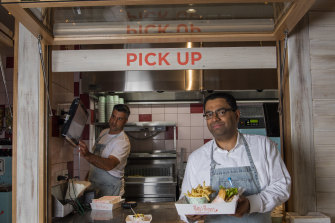 Betty’s Burgers is aiming to expand from 39 to 150 stores across Australia in coming years.Credit:Louise Kennerley

It’s a potentially lucrative opportunity that Mr Alani is determined to be at the forefront of. “We want to be a leader in the ESG space.”

While Betty’s Burgers sales exploded during the pandemic, Mr Alani said the chain’s focus was in restaurant dining, and the company hopes to capitalise on the return of diners as lockdowns subside.

“During the pandemic, we could not offer that [dine-in] experience to our customers. And despite that, we still did well. Now that you can actually go into our restaurants, sit down, interact with our staff … really absorb that entire experience. That is where we do our best.”

Despite widespread concerns about shortages in the hospitality sector, Mr Alani said the business has had no trouble hiring workers.

Data from employment website SEEK reveals the biggest growth in job ads by far was in hospitality and tourism, up 28.5 per cent between August and September.

“While it’s going to be tough, hiring people, I think we’re in a far better position than anyone else. We’ve been able to successfully poach a lot of people into working for Retail Zoo and in our stores.”

And how about the supply chain crisis crippling industries the world over?

It’s a problem the Retail Zoo chief believes might injure smaller players, but the monumental spike in take-out during the pandemic has given Betty’s Burgers a significant buffer. He’s not worried. “We got onto this probably 6-8 months ago and we’re well-stocked.”