The incoming Biden administration’s nominee for transportation secretary will be busy producing emails for a conservative government watchdog group about his role in establishing a special residential ID card program for illegal immigrants.

Pete Buttigieg, the former mayor of South Bend, Ind., agreed to search his personal emails for messages concerning the "Community Resident Card," also known as the SBID program for illegal immigrants in the city. By agreeing to produce email messages, Buttigieg will avoid being deposed in a public records lawsuit brought by Judicial Watch in Indiana state court.

Judicial Watch made the agreement public the same day President-elect Joe Biden announced the nomination of his one-time Democratic primary rival to run the Department of Transportation.

In December 2016, then-Mayor Buttigieg worked with the La Casa de Amistad Inc., a Latino nonprofit advocacy group in South Bend, to create the ID card program. The nonprofit produced and paid for the ID cards, meaning the program was not subject to government transparency laws.

Buttigieg signed an executive order requiring local law enforcement, schools and other government services to accept the SBID cards as a valid form of identification. The cards cannot be used as driver's licenses. 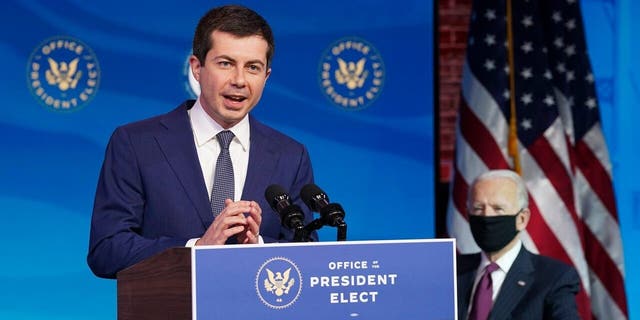 Former South Bend, Ind. Mayor Pete Buttigieg, President-elect Joe Biden’s nominee to be transportation secretary reacts to his nomination as Biden looks on during a news conference at The Queen theater in Wilmington, Del., Wednesday, Dec. 16, 2020. (Kevin Lamarque/Pool via AP)

Judicial Watch made a public-records request to the city of South Bend on the card program in June 2019, when Buttigieg was a contender for the Democratic presidential nomination. After an unsatisfactory response, Judicial Watch sued for the records that August in St. Joseph Circuit Court alleging the city violated Indiana’s Access to Public Records Act.

"This victory will help the public understand Mayor Buttigieg’s plan to create special ID cards to make it easier for illegal aliens to stay in the United States contrary to law," Judicial Watch President Tom Fitton said in a statement. "It is curious that the mayor fought us for so long on this simple request for information."

Illegal immigration and local government policies granting benefits or shielding these residents from federal authorities have been a polarizing issue for years. The Biden transition team did not respond to an inquiry for this story.

In 2019, Buttigieg's presidential campaign told NBC News the lawsuit was a "political stunt that is intended to scare immigrants."

When La Casa de Amistad announced the South Bend Community Resident Cards in December 2016, then-Mayor Buttigieg posed for a picture to have his own SBID card and announced he would sign an executive order requiring city departments, such as police, fire, school, parks and libraries to recognize the ID cards.

"Something like a municipal ID or city ID, that allows you to be a card-carrying member of the city of South Bend, is an important thing that allows people to be better included and to be more empowered," Buttigieg said according to the South Bend Tribune. "We have got to make sure that the city is supporting everyone who lives here."

The city’s common council had agreed to set aside $18,000 to fund the cards. However, La Casa was concerned city-issued the cards would be disclosable as public records, and increase exposure to federal immigration authorities, the South Bend Tribune reported. The nonprofit charged $25 for the cards. The price dropped to $10 for undocumented seniors and youth who wanted an ID card.

While campaigning earlier this year for president ahead of the Nevada Caucuses, a state with a large Hispanic population, Buttigieg touted the ID program.

"One thing I realized very quickly as mayor is that I'm responsible for supporting every resident of our community regardless of citizenship status, and we saw a lot of people who were at risk because they didn't have a way to get ID," Buttigieg told Business Insider during the Nevada campaign.