President-elect Joe Biden has selected Jaime Harrison, a former Senate candidate from South Carolina, to serve as the next chairman of the Democratic National Committee, The New York Times and NBC News reported Thursday.

Harrison, who previously served as the chairman of the South Carolina Democratic Party and as an associate chairman of the DNC, set fundraising records during his 2020 campaign against Sen. Lindsey Graham (R), a race that made Harrison a rising star inside the party even as he ultimately lost by 10 points.

He was among a group of Black Senate candidates in Southern states that included Sen.-elect Raphael Warnock in Georgia and Mike Espy in Mississippi, who all generated widespread enthusiasm in states where Democrats haven’t enjoyed much recent success. Along with gubernatorial candidates like Georgia’s Stacey Abrams and Andrew Gillum in Florida, Harrison and the other Senate challengers also offered convincing refutations of the Democratic Party’s traditional hesitance to embrace Black candidates in statewide races, potentially ushering in a new era of Black candidates and party leaders.

In a recent interview with HuffPost, Harrison cited those candidates, even when they fell short, as models for the party to follow.

“All these candidates brought a new energy and excitement to politics because they were able to get, particularly, African American voters in their areas interested in the race in a way that they haven’t been before,” he said. “But they’ve also been able to go and talk to middle-of-the-road voters and get them to take a look at things, and galvanize energy not only in their states but across the country. So I believe that it is definitely a path forward for Democrats; we just need to do all that we can to take advantage of it.”

Harrison will need to win election at the DNC’s winter meeting on Jan. 21, but Biden’s backing all but ensures the vote is a formality. Harrison will take over the party from current DNC Chairman Tom Perez, whose term ends in February. Perez decided last year that he would not seek reelection to the position he assumed in 2017.

Harrison’s bid for the DNC’s top spot received a boost from one of the party’s most influential stalwarts in December, when House Majority Whip James Clyburn ― the South Carolina Democrat who helped consolidate party support behind Biden ahead of the state’s presidential primary last February ― pushed the incoming president to choose Harrison.

“Jaime’s unique life experiences will serve him well as chair,” Clyburn told Politico in December. “He grew up in rural Orangeburg, South Carolina, and is well prepared educationally and politically to lead the DNC. His experiences as a state Democratic Party chair and associate chair of the DNC and his recent candidacy have provided him with a good understanding of local parties and organizations, and a heavy dose of empathy for candidates and their supporters.” 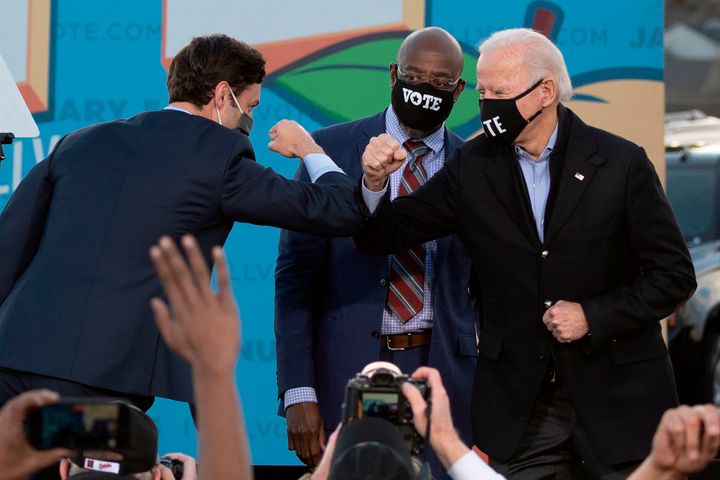 Harrison will take control of a party that accomplished its primary goal ― beating President Donald Trump ― in November and won back the U.S. Senate majority thanks to Warnock and Sen.-elect Jon Ossoff’s victories in Georgia’s run-off elections this month. Perez has also been widely credited with reorganizing the party and paying down heavy debt loads it carried into the 2020 cycle.

Still, the recent elections left Democrats with plenty of problems to fix. They fell short of the sweeping Senate majority they had hopes of winning in the final weeks of the election. They lost seats in Congress, putting their majority within the GOP’s reach in 2022. And Democrats failed to flip a single state legislative chamber despite pouring record amounts of cash into down-ballot races, leaving the party vulnerable in the redistricting processes that will take place this year.

Those shortcomings led to intra-party battles over the party’s direction, strategy and rhetoric in the weeks after the election, especially between its progressive and moderate wings and between older and younger Democrats.

The party is also facing a looming fight over the prominence of the Iowa caucuses, the traditional first stop for presidential campaigns that came under intense criticism last February after vote-counting problems delayed results and caused chaos on caucus night, issues that only deepened some progressives’ mistrust of the Democratic establishment.

Harrison told HuffPost in January that he thought the party needed to take a longer-term view toward recruiting and grooming candidates to attract a wider array of challengers who are prepared and funded earlier in each election cycle, especially when they come from backgrounds and communities the Democratic Party hasn’t traditionally cultivated.

Democrats, he said, need to do more to connect new candidates to traditional donor and volunteer networks to boost their and their party’s chances for victory.

“I hope what will happen also is that if we have candidates like us that we were thinking about down the road, and we start helping them make those connections and training them and teaching them the ins and outs of running on a statewide basis earlier,” Harrison said. “I hope we start thinking on a much longer-term basis and I hope [we] start to diversify folks that we look at running for office. I think that that’s the path of victory for us.”

The 2022 slate will offer Democrats plenty of opportunities to do just that: The party’s most obvious opportunities to pick up Senate seats are in Pennsylvania, Wisconsin and perhaps Ohio, three traditional battleground states in the Rust Belt. But a map heavy on GOP incumbents may also draw Democratic attention toward the South, where Florida, North Carolina and Georgia will be home to competitive races and Alabama, Kentucky, and Harrison’s home state of South Carolina will all have Senate elections, too.

Many of those will take place in deep-red states where Democrats face long odds of success. But Harrison signaled in his interview with HuffPost that the Democratic Party needs to expand its focus beyond the metropolitan areas where it has been most successful and begin to rebuild in states where victory seems much farther off.

“Those people in that part of the country … need to know that we see them, that we hear them, that we value them, and that ultimately, we will fight for them when we are in elected office,” Harrison said. “It’s going to take some time in order to regain their trust because we haven’t talked to them in so long, and many of them just don’t think we see them or that we can relate to them.”