Biden says voting system ‘under assault, protecting it is ‘single most important thing’

President Biden on Monday warned his fellow Democrats that the voting system was under assault and protecting it was the “single most important thing to do.”

The president delivered those remarks while headlining a virtual fundraiser for the Democratic National Committee Monday evening. His purpose there was to build up resources ahead of next year’s midterm elections when Democrats will be defending the razor-thin majorities in both the House and the Senate. 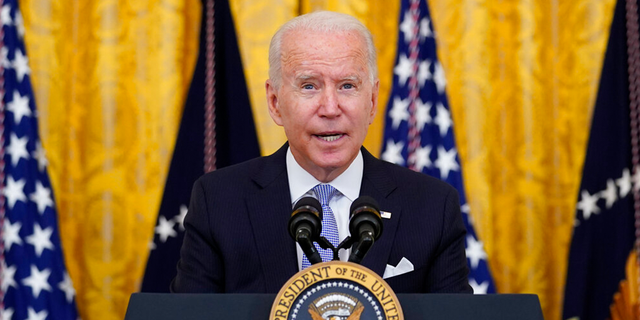 “The single most important thing that we have to do is we have to protect the voting system, protect the sacred right to vote,” Biden said from the Executive Residence. “It’s under assault in ways that I haven’t seen in my entire career.”

Biden blamed the fragile state of the country’s voting system on Republicans, whom he accused of wanting to dictate which votes count.

“It’s outrageous. We’re going to fight like hell so that doesn’t happen,” Biden said. “That’s one of the most important things we can do.”

Biden then turned his sights on the 2022 midterms, imploring Democrats to get their act together, lest their failure to do plays into a Republican victory.

“We won in 2020 as a unified party. As we look to 2022 … the question the American people are going to be asking is whether we’re helping them and their families and do we understand what they’re going through. Can we deliver?”

He accused Republicans of offering nothing but “fear and lies and broken promises” and said Democrats need to “keep cutting through the Republican fog.”

Republican National Committee spokeswoman Emma Vaughn slammed Biden’s accusations, saying in a statement that “Americans are rejecting the failed policies of the Biden administration and turning towards Republicans’ proven message.

“The RNC continues to build upon the successes of our data-driven ground game, and we look forward to holding Biden and the Democrats accountable for their resounding failures when we take back the House and Senate in 2022.”