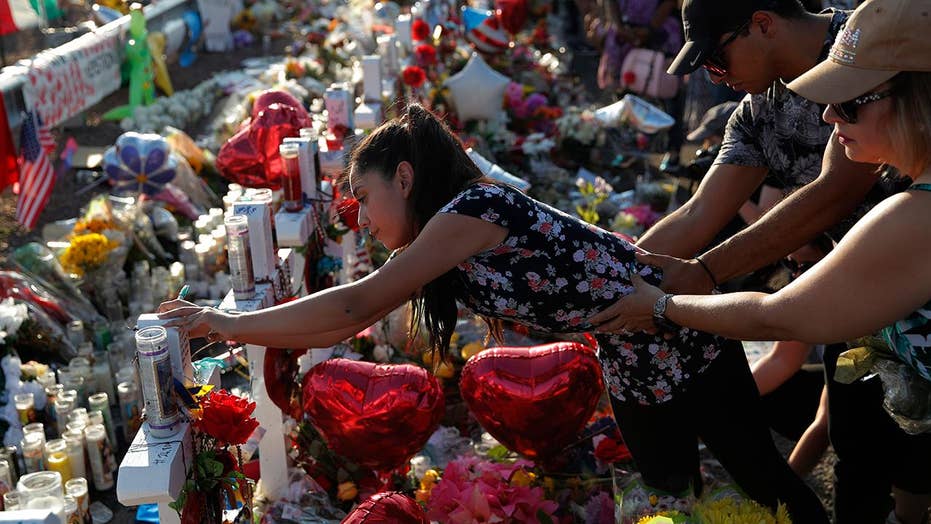 President Biden, in marking two years since the El Paso shooting which took the lives of 23 individuals, called Tuesday for Americans to “stand united against hate and violence,” outlining his administration’s efforts to combat domestic terrorism and end “the plague of gun violence” in the country.

In an op-ed in the El Paso Times, the president and first lady Jill Biden sent their “love” to the families of those who lost their lives.

“While our losses are not the same as yours, grief is universal,” he wrote. “We know the pain of today may still feel as fresh as it was when you first heard the news, knowing all that you lost can never be replaced.”

The president said the anniversary of the massacre “is a reminder of the unfinished work to heal the soul of this nation.”

“Two years ago, a gunman armed with rage and rifle targeted the people of El Paso, and our most deeply held American values. He chose this city defined by its diversity that celebrates its rich Hispanic heritage and connection with the people of Ciudad Juárez,” Biden wrote. “He thought that his hatred of immigrants could prove more powerful than the culture and vibrancy of the people of this community. He was wrong.”

Biden said, though, that the intelligence community has “confirmed what the people of El Paso know all too well: the most lethal terrorist threat to our homeland in recent years has been domestic terrorism rooted in white supremacy. We cannot ignore it.  We must confront the spread of hate-fueled violence in every form.”

“We are doing so by taking action to reduce online radicalization and recruitment to violence,” Biden wrote Tuesday. “We’re also disrupting the networks that inspire such violence by domestic terrorists and hate groups and providing resources to communities to build resilience.”

The administration’s strategy is also set to improve information sharing throughout law enforcement at the federal, state, local, tribal and territorial levels, and, at times, with private-sector partners.

The Justice Department and the FBI are set to announce a new robust system to methodically track domestic terrorism cases nationwide, an official told Fox News, while the State Department will also work with the intelligence community to learn from foreign partners about the “international dimensions” of the threat.

The administration has also “revamped support to community partners” to prevent individuals from ever reaching the point of committing terrorist violence. Officials told Fox News that the Department of Homeland Security, for the first time, has designated “Domestic Violent Extremism” as a national priority area within the agency’s grant program, meaning more than $77 million will be allocated to state and local partners to “prevent, protect against, and respond to domestic violent extremism.”

As part of the effort, DHS will work with the FBI and the Defense Department in an effort to incorporate training for service members separating or retiring from the military on potential targeting of those with military training by violent extremist actors.

Meanwhile, the president on Tuesday also said the U.S. “must commit to ending the plague of gun violence that steals innocent lives and continues to devastate our communities.”

“I will continue to do everything I can to fight for commonsense gun laws that Americans overwhelmingly support and I call again on Congress to do what we know will make a difference, including a ban of weapons of war — assault weapons and high-capacity magazines like the one that ravaged and pierced this city,” Biden wrote. “And, I will continue to act to reduce gun crime using existing authority — ranging from reining in the proliferation of ‘ghost guns’ to investing in community policing and community violence interventions that can save countless lives.”

The president and attorney general in June announced a “zero tolerance” policy for gun dealers who willfully violate the law as part of the Biden administration’s strategy to combat what the Justice Department calls a “staggering” surge in violent crime.

The “zero tolerance” policy targets federally licensed firearms dealers who “willfully” transfer a weapon to someone prohibited from owning one or ignore a tracing request from the Bureau of Alcohol, Tobacco, Firearms and Explosives (ATF). The ATF would seek to revoke the dealer’s license after the first offense, a senior White House official said.

At the time, the Department of Justice announced that it is launching “strike forces” to target gun traffickers and to provide more transparency around the enforcement of federally licensed firearms dealer policies. The strike force teams will coordinate with ATF and share information with local and state law enforcement agencies about where firearms originate and where they are used to commit crimes in an effort to bring down gun-dealing rings.

The president, in the op-ed, reminded that in the days following the El Paso shooting in 2019, he said “we must join together as Americans and stand united against hate and violence.”

“I believe that with even greater resolve and urgency today,” he said. “We must all work together to defend our values, our democracy, and our freedom to live together peacefully.”

He added: “We owe it to the families of El Paso. We owe it to each other and for the soul of our very country.”