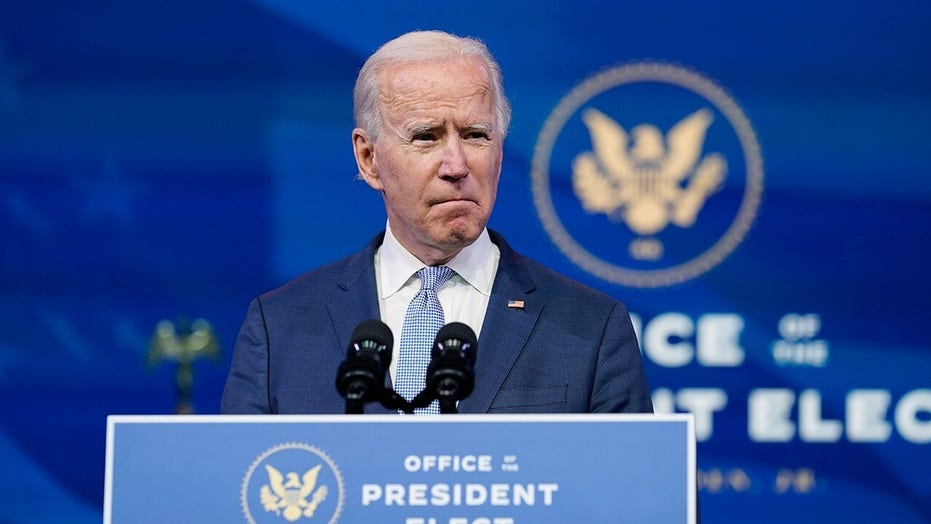 President-elect Biden and Vice President-elect Harris are facing intense pushback for suggesting that there has been a double standard between how law enforcement treated the Capitol Hill rioters on Wednesday versus the "peaceful" Black Lives Matter protesters last summer.

Trump supporters sparked unrest on the steps of the Capitol Building as a joint session of Congress was certifying Biden's Electoral College victory, causing lawmakers to go into lockdown. The riot left four dead, including one pro-Trump demonstrator who was shot and killed by Capitol Hill police, and at least 68 arrests, according to D.C. police.

However, while addressing the nation on Thursday, both the incoming president and vice president indicated that there was a great disparity between what took place on Capitol Hill and the violence that took place across the country last year following the death of George Floyd on May 25 while in the custody of Minneapolis police.

Biden blasted the "clear failure" to "carry out equal justice," alluding to a message he said he received from his granddaughter, who had sent him an image of "military people in full military gear" in front of the Lincoln Memorial "because of protests by Black Lives Matter."

"She said, 'Pop, this isn't fair,'" Biden said. "No one can tell me that if it had been a group of Black Lives Matter protesting yesterday, they wouldn't have been treated very, very differently than the mob of thugs that stormed the Capitol. We all know that's true, and it is unacceptable. Totally unacceptable."

Harris offered a similar message when she took to the podium moments later.

"We witnessed two systems of justice when we saw one that let extremists storm the United States Capitol, and another that released tear gas on peaceful protesters last summer," Harris said. "The American people had expressed, rightly, outrage. We know this is unacceptable. We know we should be better than this."

Critics slammed both Biden and Harris for pushing such a narrative, many noting their lack of condemnation of the violence that took place last year.

"Four people are dead after what happened yesterday. And you know what? People died last summer, too. Countless businesses destroyed. People’s livelihoods set on fire and stolen. You refused to condemn that violence. Yesterday was horrific, but you’ve lost your right to moralize," National Review writer Alexandra DeSanctis scolded the incoming president.

"This is complete nonsense," conservative writer A.G. Hamilton reacted to Biden's remarks. "It's gaslighting that requires ignoring what we actually witnessed on a nightly basis last summer."

"They really just know how to make everything so much worse. This is untrue, divisive race-baiting, and absolutely no one in the media will call her out for this lie," podcast host Allie Beth Stuckey tweeted in reaction to Harris. "This is the same woman who tweeted out a BAIL FUND for rioters who burned down Minneapolis."

"As someone who has covered many of the riots last year, I can say this narrative is simply false," TownHall.com journalist Julio Rosas similarly pushed back towards Harris. "Tear gas, pepper balls, pepper spray, and flashbangs were all used yesterday, just as they were used on rioters in 2020."

"THEY DID USE TEAR GAS YESTERDAY," National Review contributor Pradheep J. Shanker exclaimed. "Furthermore, 4 people died. We largely did not seen any death tolls like that all summer. Again, these are Democrats IGNORING FACTS AND REALITY, and gaslighting America on race instead. Didn't we have enough of a President doing that already?"