Biden: Austin is ‘the person we need at this moment’ to run Pentagon

Responding to criticism from fellow Democrats over his decision to name a recently retired general to lead the Defense Department, President-elect Joe Biden is defending his choice of retired four-star Gen. Lloyd Austin as defense secretary in his upcoming administration.

“There’s no doubt in my mind – not any doubt whatsoever – whether this nominee will honor and respect and on a day-to-day basis breathe life into the preeminent principal of civilian leadership over military matters in our nation,” Biden said Wednesday as he introduced his nominee for Defense secretary.

And Austin, who if confirmed by the Senate would make history as the first Black Defense secretary, spotlighted his “deep appreciation and reverence for the prevailing wisdom of civilian control of our military."

He added: "I intend to keep this at the forefront of my mind.” 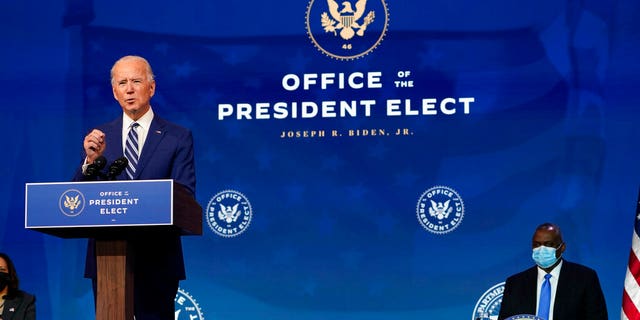 President-elect Joe Biden speaks during an event to announce his choice of retired Army Gen. Lloyd Austin, right, to be secretary of defense, at The Queen theater in Wilmington, Del., Wednesday, Dec. 9, 2020. (AP Photo/Susan Walsh)

Biden's pick comes four years after President Trump nominated retired Gen. Jim Mattis as his first defense secretary, a position that is traditionally filled by civilians. Like Mattis, Austin would require a waiver passed by both houses of Congress due to federal law that prohibits retired officers from serving as defense secretary for at least seven years after they step down from military service.

Mattis was the first retired military officer to serve as defense secretary since George C. Marshall seven decades ago.

The president-elect’s choice of Austin instantly met with opposition from some top Democrats in Congress. Among them, Sens. Elizabeth Warren of Massachusetts and Richard Blumenthal of Connecticut raised red flags and said they would be opposed to granting a waiver.

“I have deep respect for General Lloyd Austin. We worked together on Iraq when he commanded U.S. forces there, when he was vice chief of the Army, and when he was the CENTCOM commander,” the moderate Democrat from Michigan wrote in a statement. “But choosing another recently retired general to serve in a role that is designated for a civilian just feels off. The job of secretary of defense is purpose-built to ensure civilian oversight of the military."

Aware of the criticism by some in his own party, Biden emphasized that “there’s no question that he is the right person for this job at the right moment leading the Department of Defense at this moment in our nation’s history” and that “this is not a post he sought, but I sought him.”

“There’s a good reason for this law that I fully understand and respect and I wouldn’t be asking for the exception if I did not believe that this moment in our history didn’t call for it. It does call for all. And if I didn’t have the faith I have in Lloyd Austin to ask for it. I believe in the importance of civilian control of the military,” the president-elect said.

Mattis, while widely respected for his military record, was criticized for surrounding himself with fellow officers at the expense of civilian leadership. Mattis resigned two years ago, in protest of Trump’s military policies.

But Biden said that Austin would “be bolstered by a strong and empowered civilian sector and senior officials working to shape DOD’s policies and ensure that our defense policies are accountable to the American people.”

And Austin said, “I look forward to surrounding myself with experienced, capable, civilian appointees and career civil servants who will enable healthy civil-military relations grounded in meaningful civilian oversight.” 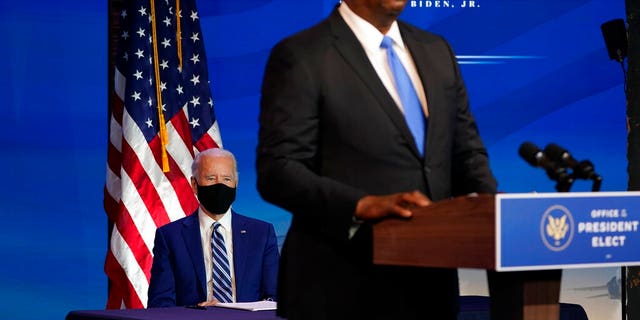 Besides Mattis, Trump named a high number of retired generals to top civilian posts in his administration. Among them were retired Marine Corps Gen. John Kelly as homeland security secretary and later White House chief of staff, and retired Army Lt. Gen. H.R. McMaster as national security adviser. And the president, while highlighting his efforts to rebuild the military during his tenure, has also been targeted by critics for politicizing the military.

Pointing to Trump, Biden said that the military-civilian dynamic “has been under great stress the past four years and I know that secretary-designate Austin is going to work tirelessly to get it back on track.

“I’ve seen him lead American fighting forces on the field of battle. I’ve also watched him faithfully carry out the orders of the civilian leadership of this nation,” Biden said. “I know this man. I know his respect for our Constitution. I know his respect for our system of government. So just as they did for Secy. Jim Mattis, I ask the Congress to grant a waiver for Secy.-designee Austin.”