President Biden said he met with former Israeli Prime Minister Golda Meir and served as a liaison between Israel and Egypt during the Six-Day War despite still being in law school at the time.

The president, who spoke during a menorah lighting in celebration of Hanukkah Wednesday at the White House, appeared to be referring to a meeting he had with her just prior to the October 1973 Yom Kippur War. It’s not clear what he meant by his role as a “liaison.”

“I have known every — every prime minister well since Golda Meir, including Golda Meir,” Biden said. “And during the Six-Day War, I had an opportunity to — she invited me to come over because I was going to be the liaison between she and the Egyptians about the Suez.

“And I sat in front of her desk,” he continued. “And she had a guy — her staff member — to my right. His name was Rabin. And she kept flipping those maps up and down. She had that bevy of maps — sort of kept it — and it was — it was so depressing what she was — about what happened. She gave me every detail.”

The Six-Day War, a short conflict pitting Israel against a coalition of Jordan, Syria and Egypt that completely reshaped the region, broke out in June 1967, one year before Biden graduated from Syracuse University College of Law. Meir was not elected to serve as prime minister until almost two years after the war, serving in the role from 1969-1974.

Though Biden Wednesday appeared to be touting his relationship with Meir and support for Israel, a classified Israeli memo unearthed last year summarizing the meeting offered details Biden left out.

The memo claims that Biden told Meir that the territories Israel had captured during the Six-Day War, which included West Bank and the Gaza Strip, amounted to “creeping annexation.” 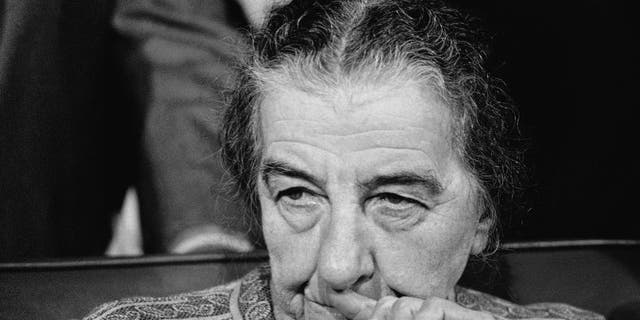 Notes taken by an unnamed Israeli official in the meeting say that Biden told Meir that during talks in Cairo before he arrived in Israel, Egyptian officials had assured him that they accepted “Israel’s military superiority,” according to a Times of Israel report last year.

Biden used this contention to suggest that Israel was in a position to offer the Arabs unilateral concessions to promote peace. He tried to convince the prime minister to withdraw from areas of lesser strategic importance, a suggestion Meir rejected before lecturing the young senator about the problems Israel was facing in the region.

The memo also claims that Biden was highly critical of the Nixon administration during the meeting, accusing it of being “dragged by Israel” while debate about the Middle East was bogged down in the Senate because lawmakers were fearful of offending Jewish voters.

The official included his own notes recording his impressions of Biden at the bottom of the memo, saying he was full of respect toward Meir and assured the prime minister he was there to learn, “and yet while speaking displayed a fervor and made comments that signaled his lack of diplomatic experience.”

The White House did not immediately respond to a Fox News request for comment.