President Biden Friday ripped what he said was a “disturbing” trend of GOP-backed state initiatives seeking to address issues related to transgender youth, describing the bills as “nothing more than bullying disguised as legislation.”

Biden addressed bills targeting transgender youth sports participation and health care during a White House event in honor of LGBTQ+ Pride Month. The president noted the Department of Justice recently challenging the constitutionality of bills in Arkansas and West Virginia.

“These are some of the ugliest, most un-American laws I’ve seen and I’ve been here a while,” Biden said at the event. “Many of them target transgender children, seeking to prevent them from seeking the appropriate medical care, for using the bathroom at high school, the one where they’ll be most safe, even preventing them from joining sports teams with their classmates.”

Biden has made the expansion of LGBTQ+ rights a priority in his administration, signing executive orders shortly after taking office aimed at banning discrimination based on sexual orientation or gender identity at federally funded institutions. Earlier this month, Biden’s Department of Education declared Title IX protections apply to gender identity, in a reversal of the Trump administration’s stance. 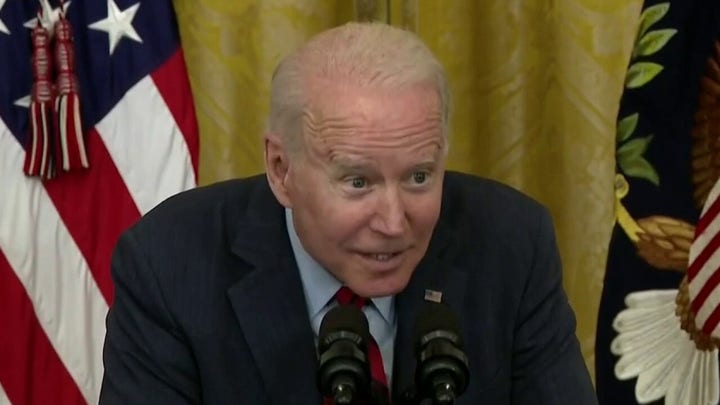 The Department of Justice filed statements of interest in the Arkansas and West Virginia bills earlier this month, a likely precursor to court battles over the hotly debated measures. The Arkansas law banned “gender-affirming care” such as hormone therapy and puberty blockers for transgender youth, while the West Virginia law banned transgender youth athletes from participating in girls’ sports.

Transportation Secretary Pete Buttigieg also spoke at the event, touting the administration’s progress on advancing LGBTQ+ rights even as he condemned the state bills.

“There’s an especially dangerous political strategy arising in some states right now, as some politicians try to gain an advantage by picking on transgender kids, some of the most vulnerable people in this country,” Buttigieg said. “There are consequences when politicians and other leaders respond to transgender peoples’ search for equality and belonging by basically denying that someone can be transgender at all.”

Biden also called on Senate lawmakers to pass the Equality Act, a sweeping Democrat-backed bill that would update existing civil rights and labor laws to strengthen protections for the LGBTQ community.

Republicans have opposed the proposal due to concerns it could infringe on the rights of religious groups.

“We must protect the gains we’ve made and fend off the cruel and unconscionable attacks we’re seeing now and ensure that everyone enjoys the full promise of equality, dignity and protection,” Biden said.