The announcement comes amid privacy concerns, as some argue that mandating vaccine passports could speed the reopening of international travel and the economy. But the proposition has raised questions about how much governments, employers and venues have a right to know about a person’s virus status.

“Let me be very clear on this. I know there’s been lots of questions,” Psaki said during the press briefing Tuesday. “The government is not now, nor will we be, supporting a system that requires Americans to carry a credential.”

Psaki went on to say that “there will be no federal vaccinations database and no federal mandate requiring everyone to obtain a single vaccination credential.” 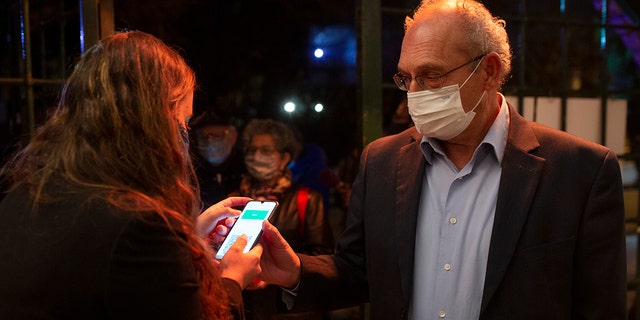 “As these tools are being considered by the private and non-private sectors, our interest is very simple from the federal government,” Psaki continued. “Which is, Americans’ privacy and rights should be protected. And so that these systems are not used against people unfairly.”

President Biden’s chief medical adviser Dr. Anthony Fauci this week also said that the government will not mandate vaccine passports for travelers or businesses after the pandemic is over.

“I doubt that the federal government will be the main mover of a vaccine passport concept,” Dr. Anthony Fauci, who also serves as President Biden’s chief medical adviser, told the Politico Dispatch podcast on Monday.

“They may be involved in making sure things are done fairly and equitably, but I doubt if the federal government is going to be the leading element of that,” he added.

In the U.S., the issue has become largely partisan. Republicans are largely against the concept. Two Ohio state legislators, for instance, recently told Fox News that they are planning to introduce a bill that will preemptively ban vaccine passports over concerns about privacy and government overreach.

Meanwhile, New York became the first state to roll out a digital vaccine passport when it recently launched the so-called “Excelsior Pass.”

“As more New Yorkers get vaccinated each day and as key public health metrics continue to regularly reach their lowest rates in months, the first-in-the-nation Excelsior Pass heralds the next step in our thoughtful, science-based reopening,” Gov. Andrew Cuomo said of the vaccine passport rollout.

Still, some private businesses and organizations may look at developing ways to confirm that someone is vaccinated. Fauci spoke to this during his appearance on the Politico Dispatch podcast, noting that businesses or schools may require them to enter their buildings.

“I’m not saying that they should or that they would, but I’m saying you could foresee how an independent entity might say, ‘well, we can’t be dealing with you unless we know you’re vaccinated,’ but it’s not going to be mandated from the federal government,” he said.