Department of Homeland Security Secretary Alejandro Mayorkas traveled to the US-Mexico border on Friday with a group of bipartisan senators. Typically on such a trip, a cabinet secretary and lawmakers would be accompanied by reporters or a member of the White House press pool to feed notes back to newsrooms.

But on this trip, the Biden administration blocked that from happening.

It’s part of a larger pattern of restricted media access at the southern US border — despite promises of transparency and the fact that at least 14,000 migrant children are detained in federal custody amid a surge in migrants attempting to enter the country.
The lack of access was repeatedly pointed out by journalists this week. A number of live-shots from the border have ended with a reporter pointing out that officials denied access to the facilities holding migrant children.

In a statement Thursday, Radio Television Digital News Foundation Executive Director Dan Shelley blasted the Biden administration for failing on its promise of transparency. “The President promised things would be different,” Shelley said. “Turns out he was right, but in this case not the way we had hoped. The Trump administration allowed journalists into juvenile migrant detention facilities.”
Shelley urged Mayorkas to “immediately” allow journalists access to Border Patrol processing facilities and officials.
“At a time when the southern border of the United States is undergoing a historic surge of migrants, it is more important than ever that journalists be allowed the necessary access to report accurately and independently on the Border Patrol’s response to the increased arrival of migrants and the well being of those housed in Border Patrol facilities,” he said.
The Trump administration did permit access to the facilities and provided the press with photos. But it was for a very different reason, as NBC’s Jacob Soboroff pointed out.
“The Trump administration let us in. And they let us in because they wanted to explain to us and show us the cruelty of the separation policy,” Soboroff said in an on-air appearance Thursday. “They wanted everybody to see that. Now it’s the Biden administration’s turn to open the doors so we can fully tell the story of not just where they want to go but why they want to go to that place and show the American public ourselves.”
Getty Images special correspondent John Moore on Twitter Friday asked US Customs and Border Protection “to stop blocking media access to their border operations.”
“I have photographed CBP under Bush, Obama and Trump but now — zero access is granted to media,” Moore said. 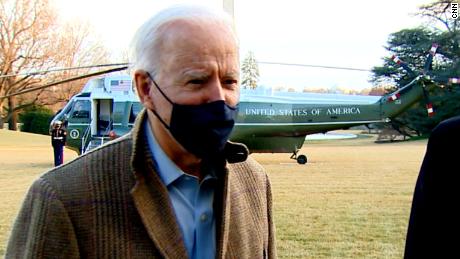 Democratic Senator Chris Murphy was one of the lawmakers who traveled to the border on Friday. After visiting a processing facility, Murphy tweeted a description of what he saw: “100s of kids packed into big open rooms. In a corner, I fought back tears as a 13 yr old girl sobbed uncontrollably explaining thru a translator how terrified she was, having been separated from her grandmother and without her parents.”
After years of bashing the news media, some Republicans and right-wing media outlets have suddenly morphed into press advocates. Sen. Ted Cruz tweeted that he found it “outrageous & unacceptable” there was “no press” and “no cameras” with Mayorkas.
“Next week, I’m bringing 15 senators to the border. DHS said NO to our request to bring media,” Cruz said. “I will continue to fight for press access so every American can see this crisis for themselves!”

White House Press Secretary Jen Psaki on Friday responded to a CNN Business’ inquiry about the lack of access at the border by referring to comments she made earlier in the week.
Psaki said Thursday that media tours of the facilities holding children had not been permitted due to Covid-19 restrictions. But, she said, the administration remains “committed to transparency, and we’re considering potential options, and we hope to have an update on that soon.”

In a Wednesday comment to Fox’s Kristin Fisher, who asked whether the White House had instructed border agents not to do ride-alongs, Psaki said, “I think we’ve seen, watching a number of the reports you all do, a number of Border Patrol officials who are quoted in them, who appear in them, and certainly in the White House we support that.”
But as Washington Post media columnist Erik Wemple quipped in a Friday column on the lack of press access at the border: “Officials are quoted! Well, then why complain? Because solid coverage of the border requires more than just a quote here and there.”
Source: Read Full Article