Home » World News » Bernie Sanders against Donald Trump Twitter ban: ‘Tomorrow it could be somebody else’

Bernie Sanders against Donald Trump Twitter ban: ‘Tomorrow it could be somebody else’

Sen. Bernie Sanders is not a fan of Donald Trump, but that doesn’t mean he thinks the former president should have been banned from the social media platform after the deadly Capitol siege.

“Look, you have a former president in Trump, who was a racist, a sexist, a xenophobe, a pathological liar, an authoritarian, somebody who doesn’t believe in the rule of law. This is a bad-news guy,” Sanders said on the New York Times podcast “The Ezra Klein Show” when asked if there’s “truth to the critique that liberals have become too censorious and too willing to use their cultural and corporate and political power to censor or suppress ideas and products that offend them.”

“But if you’re asking me, do I feel particularly comfortable that the then-president of the United States could not express his views on Twitter?,” Sanders, an indepe continued. “I don’t feel comfortable about that.”

Further, he said. “I don’t like giving that much power to a handful of high tech people.”

Trump fueled Capitol riot on Parler: When Trump started his speech before the Capitol riot, talk on Parler turned to civil war

Not that Sanders thinks hate speech and conspiracy theories should be allowed to spread. And he does not want the internet used “for authoritarian purposes and an insurrection.”

Twitter suspended Trump after the Jan. 6 insurrection, citing the risk of incitement to violence.

Even if Trump runs for president and wins in 2024, he will not be allowed to rejoin Twitter, the company’s chief financial officer Ned Segal said last month.

Twitter was Trump’s favorite megaphone to promote his agenda and attack critics.

“How do you balance that?” Sanders said. “I don’t know, but it is an issue that we have got to be thinking about. Because yesterday it was Donald Trump who was banned, and tomorrow, it could be somebody else who has a very different point of view.”

In this image from video, Sen. Bernie Sanders, I-Vt., speaks during debate in the Senate at the U.S. Capitol in Washington, Saturday, March 6, 2021. (Photo: AP)

Sanders is not alone in his discomfort. The leaders of the nation’s largest social media companies, including Facebook’s Mark Zuckerberg and Twitter’s Jack Dorsey, have expressed unease with a handful of corporations having so much control over the nation’s online conversation.

The handling of Trump’s social media presence prompted an outcry from conservatives, who’ve accused tech companies of anti-conservative bias and censorship. Most Americans, but not most Republicans, supported Twitter’s permanent suspension of President Donald Trump after the deadly U.S. Capitol siege, according to a January survey from The Harris Poll. 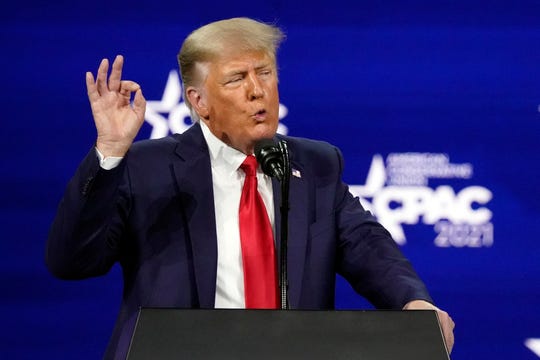 In his first speech since leaving office, former President Donald Trump accuses the Supreme Court of a lack of courage at the Conservative Political Action Conference (CPAC) in Orlando, Fla., on Feb. 28. (Photo: John Raoux, AP)

On Sunday, Trump spokesman Jason Miller said the former president would return to social media with his own social network.

“I do think that we’re going to see President Trump returning to social media, probably in about two or three months here, with his own platform,” Miller told Fox News on Sunday.

“This is something that I think will be the hottest ticket in social media. It’s going to completely redefine the game. And everybody is going to be waiting and watching to see what President Trump does, but it will be his own platform,” Trump’s longtime adviser said.