The global head of pharmaceutical giant AstraZeneca personally worked to ensure its Oxford University coronavirus vaccine would be made locally because he says Australia is “my country”.

French-born Pascal Soriot, who has been running the global operations of British-Swedish AstraZeneca out of his home on Sydney’s lower north shore and an office next to its manufacturing plant in a Sydney business park, says the vaccine was much more effective than early reports suggested, leading to a 94 per cent reduction in hospitalisations in Britain. 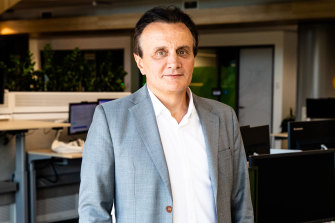 “Has it been perfect? No. But it’s really been a resounding success.”

On Friday, 90 frontline workers in the South Australian town of Murray Bridge will be the first Australians to receive a dose of the overseas-made AstraZeneca vaccine ahead of 50 million doses being made by Melbourne biotech firm CSL Limited.

Mr Soriot, who first moved to Australia in 1990 with his family, and whose two children and grandchild now live here, said he encouraged a deal to locally manufacture the vaccine because he wanted to help ensure Australia’s strategic independence.

“I was involved early on,” said Mr Soriot, a dual citizen.

“I mean, it’s my country, I wanted to make sure that people were well covered here and were protected. It was with the Health Minister [Greg Hunt] himself and his team, and our colleagues at CSL did a tremendous job.”

Mr Soriot said Australia was “very lucky” to have CSL Limited, which started life as a government department in 1916 before it was privatised in 1994 and is now our fourth largest company.

“What this crisis has shown is that you need to have some level of strategic independence to deal with [a] potential health epidemic like this one. Everybody talks about sharing until they were domiciled themselves, and then it’s all about ‘me first and everybody else later’.”

Scottish and British studies showed the AstraZeneca vaccine was now proven 100 per cent effective against death, and caused a 94 per cent reduction in hospitalisations. Its reputation that it was inferior to rival vaccines such as Pfizer was based on “not enough data” from early studies, he said.

Mr Soriot praised Australia’s “great pragmatism” in instituting lockdowns at a time many in Europe argued such restrictions could work in China but were impossible in a democracy.

“But the fact is, Australia is as democratic as Europe and has been able to do something that works. And they haven’t made it complicated.

“Europe is a great continent, but I have to say people haven’t really done as well as here in terms of managing this pandemic.“

Mr Soriot, who has had his first coronavirus vaccination, was once a vet before deciding to swap that career for one in business, which now earns him a $27.5 million salary.

He says he no longer has a formal office, but works wherever he sets up his silver Apple MacBook laptop, alongside a black leather Tumi backpack and half-drunk long black.

For the 61-year-old, the fight against coronavirus is personal. The 73-year-old mother of his personal assistant in Britain died of the virus in the first wave. “She couldn’t even see her family, it was really hard.“

But now because hospitalisation of people with the disease in Britain was “rapidly collapsing”, Mr Soriot predicted the UK would be in a “different place”, which could include lessening travel restrictions by April. In the US, that could be by June or July and in Europe by the northern summer.

“We decided from day one that we would do this at no profit,” he said, due to a commitment between the company, Oxford University and the British government. But the cost of research and development of the vaccine was at least $US500 million ($647m), he said.

The AstraZeneca vaccine works by using a viral vector, a harmless adenovirus from chimpanzees similar to a cold, to deliver genes from the coronavirus spike protein into our cells. This trains our immune system to fight the real SARS-CoV-2, the virus that causes COVID-19.

While other manufacturers such as Pfizer use a more complicated mRNA delivering system, the AstraZeneca vaccine is easier to produce and transport and is easier to distribute to poorer countries. Mr Soriot says this will be necessary to prevent the virus from spreading and mutating and then returning to richer countries.

The latest studies show the AstraZeneca vaccine protects well against all variants of the virus, including the South African variant, but out of caution, the company will have a booster ready for release by the fourth quarter, possibly October.

Mr Soriot, who says he learnt teamwork growing up in poor parts of Paris when his friends banded together in local fights, has been battling disputes in Europe over vaccine supply and efficacy, including from his own French president Emmanuel Macron who was forced to enact a U-turn on his criticism the AstraZeneca vaccine was ineffective on people over 65.

He is also facing a different threat, that of anti-vaxxers. But he is relatively sanguine, saying it is part of human nature. “You will still have people issuing misinformation. That’s the nature of democracy, you can’t stop people from speaking.”

At some point soon he will head back to Europe, but had this message for Australia: think about our future strategic strengths.

“Making cars is really not something that Australia can compete with,” he said.

But as well as mining and renewable energy, he believes Australia can build a strong industry in life sciences.

“You have lots of very smart people here. Biology is quite strong, medicine is very strong. The question, though, is, how do you nurture an ecosystem?”

In order to nurture that kind of environment, he says it requires transforming academic research into commercial reality, which needs governments to create development ecosystems and encourage venture capital.

“And it’s hard because Australia is a little bit remote from the big centres, of course.”

Get our Coronavirus Update newsletter

Stay across the news you need to know related to the pandemic. Sent Monday and Thursday. Sign up here.