Amazon may be able to avoid new taxes agreed by the G7 because its profit margins are below a 10% threshold, The Guardian reported.

The G7 group of wealthy nations announced a two-pronged agreement Saturday that tackles the tax contributions of the world’s biggest tech companies, including Amazon, Facebook, Google parent Alphabet, and Apple.

The deal seeks to introduce a 15% global minimum corporate tax rate. It also aim to address one of the key ways that global tech giants keep tax contributions to a minimum — by declaring corporate profits in tax havens, away from the countries where much of their business is done.

One criterion under discussion for selecting which companies to further tax is their profit margin, with a 10% threshold being discussed.

Above that margin, 20% of whatever profit they declare would be reallocated — and taxed — in the countries where they make sales.

This second aspect of the deal is where Amazon may have an advantage, The Guardian reported. Despite colossal sales, Amazon’s profit margin is low because of its strategy of aggressive growth and reinvestment, as Vox reported.

“Our profits have remained low given our continued investments across Europe,” the company wrote in a May blog post, which emphasizes the “millions” of dollars paid there by the company.

According to The Guardian, Amazon’s profit margin in 2020 was 6.3%, significantly below the 10% threshold.

Richard Murphy, visiting professor of accounting at Sheffield University in the UK, told the paper that the system could be “easily gamed.”

“This could turn out to be a false hope unless they get the detail right,” he told the paper. 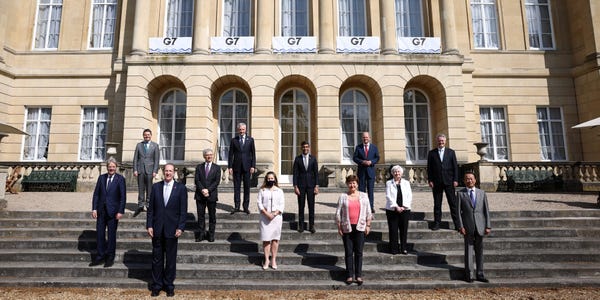 Asked on Saturday whether Amazon and Facebook would be captured by the G7 proposal, US Treasury Secretary Janet Yellen said: “It will include large profitable firms and those firms, I believe, will qualify by almost any definition,” Reuters reported.

In a statement sent to Insider, a spokesperson for Amazon said: “We believe an OECD-led process that creates a multilateral solution will help bring stability to the international tax system.

“The agreement by the G7 marks a welcome step forward in the effort to achieve this goal. We hope to see discussions continue to advance with the broader G20 and Inclusive Framework alliance.”

Big tech companies reacted positively to the G7 deal in a flurry of statements on Saturday, with Facebook saying it “welcomes” the deal, and a Google spokesperson telling Reuters the company “strongly supports” the measure.

The global minimum tax rate also has its critics, such as Oxfam. The campaign group said in a statement to Reuters that the G7 is “setting the bar so low that companies can just step over it.”

The global minimum “is similar to the soft rates charged by tax havens like Ireland, Switzerland and Singapore,” the Oxfam statement said.