A2 Milk ‘doubling down’ with new China strategy despite disruptions, economic worries

The chief executive of beleaguered milk and infant formula producer A2 Milk has said the company will double down on its China aspirations despite major uncertainties over future growth amid changing consumer preferences and economic instability.

David Bortolussi, who stepped into the role of A2’s head in February this year, told The Age and The Sydney Morning Herald the company was confident it could rebuild its sales in the key region, with the business telling investors at a strategy day on Wednesday it was planning to grow sales by around $NZ800 million ($763 million) to $NZ2 billion in the next five years. 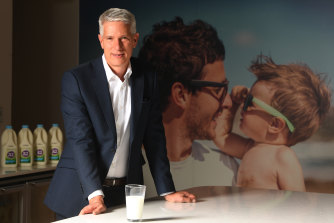 A2 Milk CEO David Bortolussi is aiming to get to $NZ2 billion in sales over the medium term.Credit:

“Through [today’s strategy] you’ll see there’s, if anything, actually a doubling down on China,” he said. “Yes it is a risk, in many ways, but it’s also our biggest opportunity by a long, long way.”

However, A2’s short-term woes remain, with the company providing a trading update that revealed that there had been little improvement in sales in the region for the first quarter of fiscal 2022. Shares plunged 10.6 per cent to $6.12 following the news.

In fiscal 2021, China made up around 32 per cent of A2’s revenue, though this is down on fiscal 2019 where China contributed to 40 per cent of sales. Since then, the advent of the COVID-19 pandemic has brought about a number of fundamental changes in the region that have hurt A2’s growth.

A drop in China’s birth rate has shrunk the market for infant formula, and the pandemic has also seen a sharp reduction in ‘daigou’ resellers, which drove a significant chunk of A2’s sales into the region. In response, domestic formula producers in China have stepped up to fill the gaps, creating more competitive intensity and faster product innovation.

On Wednesday, A2 outlined a new strategy to address these issues, telling investors the company would look to double its Chinese-label product market share, regain at least half of the English-label revenue lost in the region during COVID, and grow its other dairy and nutritional products in the region.

“It’s such a heavily regulated category, so it’s much more challenging for us. We’re going to be very careful where we expand to.”

It plans to achieve this through increased investments in marketing and e-commerce, along with expanding its distribution into more stores and Chinese cities, along with exploring other product ranges at different price points, as the company’s products are currently in a higher cost, more premium bracket.

“I think there’s an opportunity for us to expand our brand. We’ve been very successful with a…very simple, focused portfolio, but when we look at the competition you see how much others have actually innovated and expanded,” Mr Bortolussi said.

“One opportunity that we may have is actually to innovate over time and introduce another product that allows us to access perhaps a different demographic and price point.”

A2 will also focus on expansion into other markets such as Korea, Vietnam and Singapore to further build the business in non-Chinese Asian markets. It will also focus on growth in its already sizeable US business, announcing on Wednesday it had struck a deal with major US chocolate company Hersheys to produce A2-branded chocolate milk.

Mr Bortolussi stressed the company was not following in the footsteps of fellow food company Treasury Wine Estates, which was forced to almost entirely abandon the Chinese market after hefty tariffs were placed on Australian wine.

“It’s such a heavily regulated category, so it’s much more challenging for us,” he said. “We’re going to be very careful where we expand to.”

He also noted the current concerns around China’s economy, including the pressures facing the country’s property market, were not an immediate issue for A2, but acknowledged they could pose a problem in time. However, he was hopeful of government initiatives that may bolster the country’s declining birth rate.

“The government is very focused on this already has announced some policy initiatives, and we don’t underestimate how impactful government policy and action can be in China,” he said.