4 Down-Ballot Races To Watch In Illinois And Ohio

Four states were set to hold presidential primaries on Tuesday, but at the last minute, the governor in one of them tried to put a stop to election day due to the coronavirus.

But on Monday, Ohio Gov. Mike DeWine (R) tried to move the state’s primary to June.

“We should not be in a situation where the votes of these individuals who are conflicted are suppressed,” he said.

After a judge denied his request, DeWine tweeted Monday night that the state director of the Department of Health would be ordering the polls closed as a “health emergency.”

How many people actually turn out to vote in any of the states is an open question, as people stay in their homes to help slow the spread of the coronavirus.

Georgia, Kentucky and Louisiana have already delayed their primaries.

The Arizona secretary of state’s office has recommended that voters either cast a ballot by mail or drop off a mail ballot at a designated location on Tuesday.

In Florida, which has a large elderly population, many people have already voted early or by mail, but it has not gone as far as Ohio in moving all polling places out of areas like nursing homes and senior centers.

In two of the largest voting jurisdictions in Illinois, officials have received a court order allowing them to issue vote-by-mail ballots to nursing home residents.

But although the Democratic presidential race is getting top billing and attention, there are a number of House, Senate and local primaries that are worth paying attention to. Here are four HuffPost is watching, assuming voting happens in Ohio:

Robert Emmons Jr., 27, is running in Illinois’s 1st Congressional District as a progressive alternative to Rep. Bobby Rush (D), who’s been in office for 27 years.

In the heavily Democratic, lower-income district that includes the South Side of Chicago, Emmons thinks he can defeat the longtime congressman with his focus on ending gun violence and with progressive policies like a Green New Deal and “Medicare for All.”

Emmons, who is Black, faces long odds against Rush, who is also Black and is known for his years of fighting for civil rights in the 1960s. Rush won reelection in 2018 with more than 73% of the vote. Emmons, however, garnered a major endorsement last month from the Chicago Tribune, which knocked Rush for having “low visibility” in the community and credited Emmons for his “enthusiasm and energy.”

Other contenders in the race are University of Chicago law student Sarah Gad and anti-violence activist Ameena Nuur Matthews. In the solidly blue district, the election outcome will likely be decided in Tuesday’s primary. Two years ago, Rep. Dan Lipsinski (D-Ill.), a staunch moderate known for being one of the last anti-abortion Democrats in the House, eked out a 2-percentage-point victory over progressive challenger Marie Newman, a first-time candidate and virtual unknown.

Newman wants a rematch. Illinois’s 3rd Congressional District spans the southwest suburbs of Chicago, over Midway airport and encompassing parts of Cook and Will counties. It used to be known for its conservativism ― a number of veterans, an older population, a Catholic community. And Lipinski is a household name in this district; his father, William, held the seat for 22 years, before passing it to his son, Dan, in 2005.

But the district has changed. It’s younger (the median age is 38) and it’s more diverse, with a roughly 30% Latino population. It’s strongly middle class, with the median household income roughly $66,800, according to the latest census numbers.

Lipinski is hoping that conservatism is still dominant in the community. He’s had a long record of being staunchly to the right of his party. He voted against the Affordable Care Act out of concern for the debt and its mandate that employers cover birth control. He has supported defunding Planned Parenthood and clinics that offer abortion services, and he sided with Republicans on bills that ban abortions at 20 weeks.

He also voted against the 2010 bill, known as the DREAM Act, to offer legal status to some undocumented residents (though he’s come around to that) and only came to support non-discrimination legislation for LGBTQ Americans in 2019. According to exit polling from 2018, 18% of his primary support came from Donald Trump supporters.

Newman couldn’t be more different. Her platform is somewhere between Sens. Bernie Sanders (I-Vt.) and Elizabeth Warren (D-Mass.). She supports Medicare for All, a $15 minimum wage and partial student debt cancellation. She backs a Green New Deal and a wealth tax. She’s won the endorsements of Sanders, Warren and Rep. Alexandria Ocasio-Cortez, as well as the backing of EMILY’s List and NARAL but has struggled to work within a Democratic Party that’s prioritized incumbents. 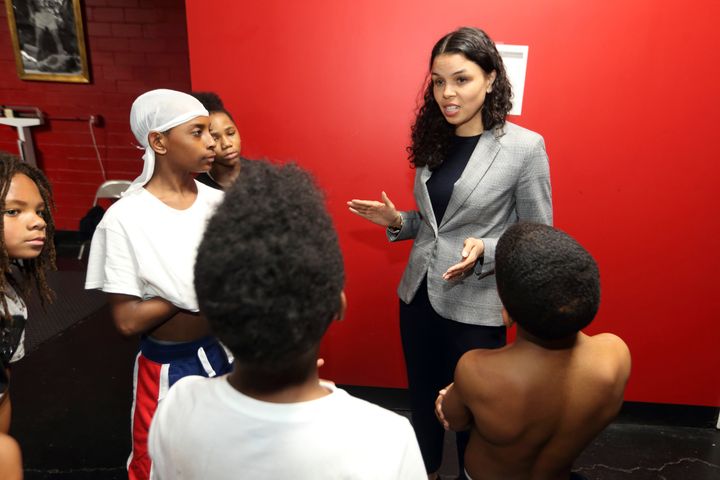 Progressive newcomer Morgan Harper is hoping to unseat Democratic Rep. Joyce Beatty, who’s been in office since 2013 in Ohio’s 3rd District, which includes much of Columbus.

Harper faces a tough battle against Beatty, who has been unchallenged until now. The 36-year-old newcomer is pushing a progressive platform of a Green New Deal, Medicare for All and swift action on reparations for racial injustice. She’s garnered the backing of the Working Families Party and Justice Democrats, the group that supported Ocasio-Cortez in her 2018 upset against a longtime Democratic incumbent in Queens, New York.

While Harper has refused to accept any corporate PAC money in her campaign, Beatty, 70, who is a member of the House Financial Services Committee, has raised funds from corporate PACs, including from the insurance industry, commercial banks, and securities and investments.

In the solidly blue district, the election outcome will likely be decided in Tuesday’s primary.

Kim Foxx, the first Black woman to serve as chief prosecutor in Illinois’s Cook County, which includes Chicago, is seeking reelection in the state’s primary. Though incumbents in reelection races usually hold a heavy advantage, Foxx faces a difficult battle.

Foxx, who in 2016 became the state’s attorney for the second-largest prosecutor’s office in the country, is facing three opponents. Former Assistant State’s Attorney Bill Conway is her biggest contender and has much deeper pockets after his billionaire father donated $10 million to his campaign. The two candidates have raised almost $16 million combined, making it the most expensive Cook County state’s attorney race in history.

Foxx has also faced heavy criticism for choosing to drop charges against actor Jussie Smollett, who was accused of staging a racist and homophobic hate attack against himself last year in Chicago. Foxx, who’s widely known as a criminal justice reformer, dropped the 16 felony charges against Smollett in keeping with her promise to send fewer nonviolent offenders to prison.

The case took an unprecedented turn when a local judge reversed Foxx’s judgment and appointed an outside prosecutor to reexamine the case. Critics, including Trump, denounced Foxx’s decision, claiming she let Smollett off the hook because he’s famous. The wave of criticism also spurred explicitly racist threats from white nationalists groups, including the Proud Boys.

Although there are two Republican candidates looking to take on the Democratic primary winner, the district hasn’t had a Republican chief prosecutor in nearly 30 years.