Home » 10 Things in Politics: Our database of Trump's top enablers

10 Things in Politics: Our database of Trump's top enablers

Good morning! Welcome back to 10 Things in Politics. I’m Brent Griffiths. Sign up here to get this newsletter in your inbox each day.

1. TRUMP’S ENABLERS: Donald Trump’s presidency didn’t happen without help. Insider dove through his business and political life, finding the 125 people and entities most responsible for his rise. He may have declared at the 2016 Republican National Convention that “I alone can fix it,” but like with his father’s business loans, Trump’s always been aided by those around him.

Check out our exclusive database of those who brought him to the edge of that escalator in 2015 and beyond.

The longest section is about those behind Trump’s historic 2016 upset and his presidency. 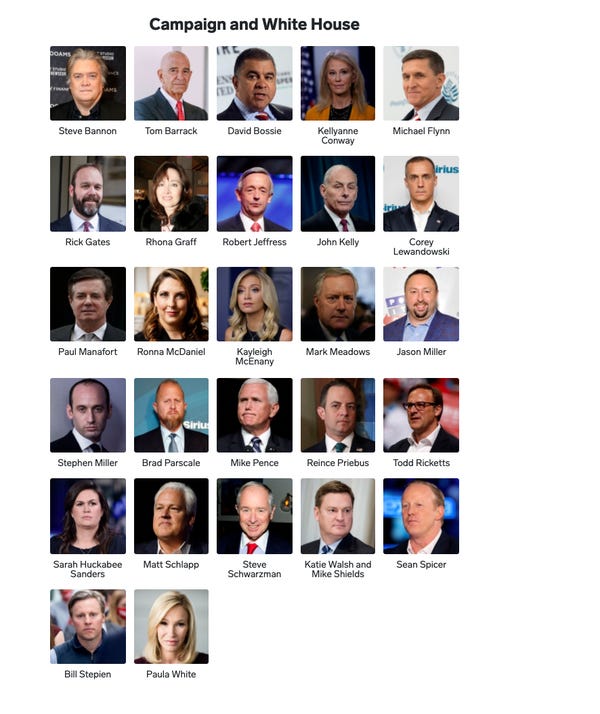 Behind the scenes: Per D.C. bureau chief Darren Samuelsohn, “This started out as an attempt to mark the end of the Trump presidency.” But given that administration’s constantly revolving door, “it felt like an org chart was necessary to see in one place everyone responsible.”

2. Biden marked the grim milestone of 500,000 coronavirus-related deaths: The president implored Americans “to honor the dead, but equally important, care for the living and those left behind,” but added: “Let this not be a story of how far we fell, but of how far we climbed back up.” The White House was later illuminated by candles. 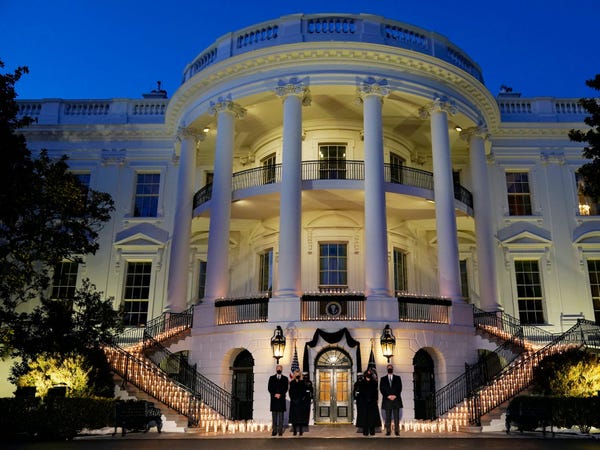 3. Neera Tanden’s tweets are coming back to haunt her: Senators have taken notice of Tanden’s past tweets comparing them to vampires and Voldemort. Now, her nomination to lead the Office of Management and Budget is seriously imperiled. The White House is sticking by her, but possible replacements are being floated.

Our exclusive report details those names.

4. The MyPillow CEO says he’s losing $65 million over false election-fraud claims: “I lost 20 retailers,” Mike Lindell told us. Dominion Voting Systems filed a defamation suit against both Lindell and his pillow company, seeking $1.3 billion in damages, for his false claims about its machines. More on Lindell’s comments here.

5. Trump lashed out at the Supreme Court for refusing to protect his tax returns: Justices ruled against the former president by allowing the Manhattan district attorney to obtain some of his tax returns and financial records for an investigation into hush-money payments, increasing the possibility of criminal prosecution.

The decision does not mean his tax returns will immediately become public, but they could be introduced as evidence in the future.

6. Merrick Garland faces a spike in anti-Asian hate crimes: There have been nearly 3,000 such incidents over the past year. Read more from our exclusive report on what some cities are already doing.

7. The top things for your calendar, all times Eastern:

8. A facility for migrant children is reopening: Government officials say an emergency camp in Texas — a vestige of the Trump era — is needed as the number of migrant children crossing the US-Mexico border continues to rise. January saw more than 5,700 apprehensions of children at the border, the highest in recent years, per The Washington Post. Immigrants activists are questioning why the camp is needed.

9. Houston, we have … video: NASA’s Perseverance rover sent back its first audio and video from Mars, depicting its landing last week. No other spacecraft has captured video of itself descending onto the red planet.

10. Obama’s podcast is a clever troll: The 44th president announced that he and Bruce Springsteen will be co-hosting a podcast entitled “Renegades: Born in the USA.” The first part is a reference to Obama’s Secret Service codename, and the subtitle is both a nod to a Boss classic and a jab at the racist birther conspiracy theory. Here’s how they’ll relive the Glory Days.