Wallabies legend and former Bell Potter managing director Simon Poidevin has been banned from providing financial services after he dropped his battle with the corporate regulator over alleged sharemarket manipulation. 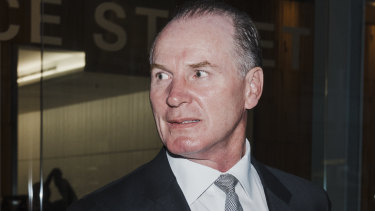 "With this investigation and appeal now entering its fifth year and given the stress and duress it has imposed on my life and family – whose support has been extraordinary – it was time to bring it to an end," Mr Poidevin said.

"I have moved on to the next phase of my career and will continue to contribute to society as I always have in philanthropy, volunteering and supporting those in need,” he said.

The matter has been shrouded in secrecy after the AAT agreed to place a confidentiality order over its decision following six days of "vigorously contested" public hearings in 2019.

Mr Poidevin won a stay on the banning order so that he could defend himself in the AAT against allegations from ASIC. The regulator had alleged he took part in transactions carried out by Mr Rodr that had the effect of creating and maintaining an artificial price in small lender DirectMoney.

Last week the AAT published a decision that lifted the stay order over Mr Poidevin, meaning his banning order of five years begins from that date.

The AAT's decision is not yet publicly available but the tribunal found the confidentiality orders over the preliminary decision be lifted unless Mr Poidevin and his former colleague seek a review of the decision to lift the suppression order over the case.

In making the decision to lift the stay orders, AAT President, Federal Court judge David Thomas made it clear that no clear inference should be drawn from Mr Poidevin and Mr Rodr's decision to withdraw their request for the AAT review.

"Third parties may draw the conclusion of such findings because the applicants decided to withdraw their applications for review and thereby concede to ASIC’s original claims," Justice Thomas said.

"However, this is by no means a foregone conclusion because it could be speculated that the applicants simply decided not to proceed any further with the second phase of the review, with Mr Rodr having served a significant period of banning and Mr Poidevin possibly not needing to be licensed given the nature of his role at Bell Potter.

"If this were to be the case, there would be a potential for uncertainty in the market that should but would not be able to be clarified," he said.

Mr Rodr has been contacted for comment through his legal team.